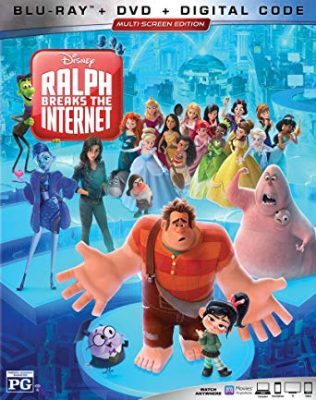 Wreck-It Ralph was a huge hit for Walt Disney Animation Studios – so of course there would be a sequel.

In the first film, Ralph and Sugar Rush racer Vanellope Von Schweetz became friends. In Ralph Breaks the Internet, face the challenges that occur when friends have very different personalities and ambitions.

When Mr. Litwak (Ed O’Neill) tries to find a replacement the only one available is on eBay for more than the game makes in a year – so he decides that, at the end of the week, he’s going to sell it for parts.
Ralph decides he’s going to take Vanellope to the internet to get that steering wheel (he’s partly responsible for the problem…).

Basically, in Ralph Breaks the Internet, Litwak’s Arcade is a small town and The Internet is a big city.

Ralph, it turns out, is very much a small town boy – happy with his routine being the bad guy at work and a good guy chugging root beers at the local pub with his friends after work.

Vanellope, on the other hand, is tired of the same old, same old.
Not only does the big city fascinate and delight her, she meets characters she can relate to and finds a potential new home in the no-holds-barred racing game Slaughter Race where she wins the respect of the game’s resident badass, Shank.

When Ralph’s small town boy insecurities threaten to break the internet, he and Vanellope have to learn that it’s okay for friends to be different and want different things.

Ralph Breaks the Internet is, essentially, a coming-of-age story – for both Ralph and Vanellope.

It is exciting, hilarious, a little bit scary and thoroughly fun.

Extras include: Surfing for Easter Eggs; The Music of Ralph Breaks the Internet; BuzzTube Cats; How We Broke the Internet; Deleted Scenes – Into the Internet, Opposites, Domestic Hell, Bubble of One and Recruiting Grandma; Music Videos – Zero by Imagine Dragons, and In This Place by Julia Michaels.

Grade: Ralph Breaks the Internet – A