When we last saw Ben Tennyson, he was a ten-year old kid with a ten-year old’s attitudes to most things – including thinking girls were yucky. Now he’s fifteen, a sports hero and more tolerant of girls – practically a fan, in fact. After five years, he’s also pretty certain that he won’t need to become Ben 10 again. He’s wrong… dead wrong. Ben 10 premieres tonight [8/7C] with a special, hour-long episode before moving to its regular time slot, Saturdays [10 a.m./9] on The Cartoon Network.

When Ben visits his grandfather Max’s RV, The Rust Bucket, to show off his gold medal for soccer, he catches an alien looking for something. When the alien flees, Ben activates a message from Max that claims he has the Omnitrix – though Ben knows this isn’t so. He gets together with his cousin Gwen but before they can do much talking, they are accosted by another alien.

After a brief disagreement, the three set out to stop a shipment of Level 5 tech that’s been smuggled onto the planet. In the course of foiling that transaction, the three encounter Kevin Levin – an old foe of Ben’s. Circumstances change when Kevin notices Gwen in a more hormonal manner – and the cousins’ alien ally saves his life. Now, they have to find out who’s supplying Earth with Level 5 tech – and why.

Ben 10: Alien Force opens with a bang – and leads into a two-pronged arc: find out who’s supplying the Level 5 tech to Earth, and find the missing Grandpa Max. The premiere introduces a new villain, an arrogant giant who refers to his workers as insects and calls Ben, Gwen and Kevin “an inferior species.” What our good guys don’t know is that Earth is the first target in our villain’s plan to conquer the galaxy. 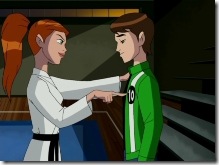 Besides being five years older, Ben and Gwen have changed in some pretty interesting ways. Gwen is a martial arts champion in her age group and has honed her magic skills a great deal. Ben is the goalie on his school’s soccer team and, as the premiere opens, has had a positive encounter with a girl named Julie.

In terms of the Omnitrix, Ben discovers that his DNA has somehow been reconfigured to shift into ten new alien forms – while Kevin has picked up the ability to absorb the characteristics of materials around him. Kevin has also noticed that Gwen is pretty good looking, though that’s not the only reason Kevin 11 is throwing in with Ben 10. 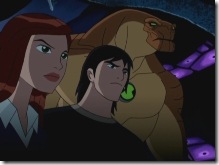 In the premiere, Ben turns into three wildly different forms: Swampfire is a plant that produces methane gas, has super strength, throws fire like a flamethrower, is nigh unto invulnerable and can control the growth of nearby swamp plants – he’s also smelly [see: methane]; Echo Echo is a small, powerful living amplifier who can project powerful sonic waves, and create multiple copies of himself, and Humongousaur is a hulking lizard-man who can bench press a pickup truck and grow to sixty-feet tall.

Man of Action [Joe Casey, Joe Kelly, Duncan Rouleau, Steve Seagle] have put together a fast-paced re-introduction to the characters from the original run of Ben 10. The premiere is fast-paced and pretty smart. The show’s design is still very much Kirby influenced and the various aliens would be right at home in the Fantastic Four’s Negative Zone – and Ben’s battle cry, “It’s hero time!” is reminiscent of Bashful Benjamin Grimm’s famous, “It’s clobberin’ time!”

One thing that I think is a bit off-putting, is that the girls in the premiere – both Gwen and Julie [who really is only in one scene] – are reed thin. It’s bad enough that there are real people out there advocating that anything above a size two is fat – we don’t need toons to give us characters that fall into that unfortunate stereotype.

Other than that, though, Ben 10: Alien Force is a genuinely fun ride.