Entertainment News for The Rest of Us
Michelle Alexandria
Movies, Television 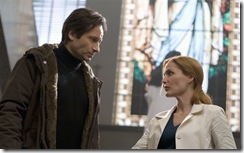 Talk about anti-climatic and ho-hum. Chris Carter and company announced the name of the new X-Files Movie – “I Want To Believe.”  This title would be perfect if the focus was on the X-File’s convoluted mytharc, but this is a stand alone monster of the week film so it feels a little off to me. The second big-screen spinoff of the paranormal TV adventure will be called “The X-Files: I Want to Believe,” Chris Carter, the series’ creator and the movie’s director and co-writer, told The Associated Press. Distributor 20th Century Fox signed off on the title Wednesday. The title is a familiar phrase for fans of the series that starred David Duchovny and Gillian Anderson as FBI agents chasing after aliens and supernatural happenings. “I Want to Believe” was the slogan on a poster Duchovny’s UFO-obsessed agent Fox Mulder had hanging in the cluttered basement office where he and Anderson’s Dana Scully worked. “It’s a natural title,” Carter said in a telephone interview Tuesday during a break from editing the film. “It’s a story that involves the difficulties in mediating faith and science. `I Want to Believe.’ It really does suggest Mulder’s struggle with his faith.” “I Want to Believe” comes 10 years after the first film and six years after the finale of the series, whose opening credits for much of its nine-year run featured the catch-phrase “the truth is out there.”   I’m attending Friday night’s New York Comic Con Panel and have been in talks with Fox to get Chris on the Hot Seat, but it’s looking more like it’s going to happen sometime after this weekend’s show.