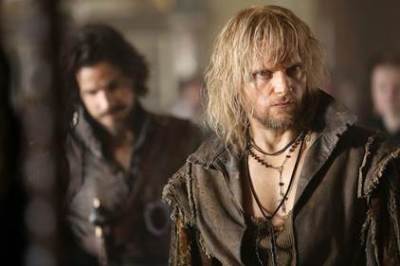 BBC America’s The Musketeers returns January 17, 2015 with a new foe to confound and harass our swashbucklers.

Marc Warren joins the show for season two as the Comte de Rochefort. For more check out the press release following the jump.

AND THERE’S A NEW VILLAIN IN TOWN

Marc Warren joins the cast to play the Comte De Rochefort, a dashing and persuasive aristocrat, with a talent for sword fighting and betrayal

BBC AMERICA’s drama series, The Musketeers, returns for season two in January. The series, which has thrilled audiences across the globe, having sold to 140 territories, is set on the streets of seventeenth century Paris, where law and order is more of an idea than a reality. Returning for season two is Luke Pasqualino (Skins, The Borgias) as D’Artagnan, Tom Burke (Great Expectations, The Hour) as Athos, Santiago Cabrera (Merlin, Heroes) as Aramis and Howard Charles (Royal Shakespeare Company) as Porthos. They are joined by Marc Warren (Hustle, Mad Dogs) as the Comte De Rochefort. Created by Adrian Hodges (My Week With Marilyn), this is a fresh and contemporary take on the classic characters in the much-loved novel by Alexandre Dumas. The Musketeers premieres Saturday, January 17 at 9:00pm ET on BBC AMERICA.

In this second season, Adrian Hodges says “I think this is a more demanding journey than before, as we’ve upped the serial element and taken the show in a slightly tough and perhaps more surprising direction. It’s everything you might expect but taken a degree or two further than last time. The tone remains the same but this is a darker and sexier Musketeers.”

Hodges adds: “Some things have changed, some things remain the same – the four boys, D’Artagnan, Athos, Porthos, and Aramis are still very much at the center of the action, but now they have a new and deadly opponent – the Comte De Rochefort, played by Marc Warren.”

Marc Warren’s character, Rochefort, is a man nursing many secrets and a very dark past. As the series progresses the true nature of his plotting is revealed and everyone around him is drawn into his sinister web. Ultimately only the Musketeers and their loyal allies and friends stand between him and a desperate act that will change all their lives forever.

Guest stars include Colin Salmon (Die Another Day, Resident Evil) and Antonia Thomas (Mistfits, The Deep). Colin plays Tariq, a mysterious interloper on the run from Spain, and Antonia plays his daughter Samara, a gusty and resilient young woman whose life is put in danger when her father is exiled.

The Musketeers is a BBC Drama Production, co-produced by BBC ONE, BBC AMERICA and BBC Worldwide.

The Musketeers are sent to retrieve the Comte de Rochefort, the Cardinal’s man in Madrid who has escaped from a Spanish Prison. Rochefort brings news that the chief author of France’s military strategy against Spain, General De Foix, has been captured.

The Musketeers must join forces with Rochefort to rescue De Foix before this critical information falls into the wrong hands, but can Rochefort be trusted, and will the Musketeers succeed against the traps laid for them?

EPISODES TWO-TEN WILL BE RELEASED ON A LATER DATE

BBC AMERICA delivers U.S. audiences high-quality, innovative and intelligent programming. Established in 1998, it has been the launch pad for talent embraced by American mainstream pop culture, including Ricky Gervais, Gordon Ramsay, Graham Norton, and successful programming formats including ground-breaking non-scripted television like Top Gear and top-rated science-fiction like Doctor Who. A joint venture between BBC Worldwide, the commercial arm of the BBC, and AMC Networks, BBC AMERICA has attracted both critical acclaim and major awards including four Emmy® Awards, five Golden Globes® and 12 Peabody Awards. The channel attracts one of cable’s most affluent and educated audiences and is available on cable and satellite TV in 80 million homes. It broadcasts in both standard and high-definition, with content available On Demand across all major digital platforms. Online,www.BBCAmerica.com is the place to go to dig deeper into pop culture with a British twist.