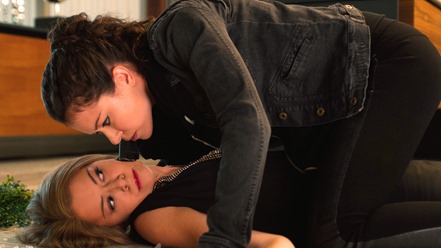 Orphan Black stars Golden Globe-nominee Tatiana Maslany as an outsider who assumes the identity of a woman who looks just like her after witnessing her suicide—only to realize that she and the dead woman are clones. Maslany was awarded the Critics’ Choice Television Award for Best Actress in a Drama Series, the Television Critics Association Award for Individual Achievement in Drama, and a Young Hollywood Award for Breakthrough Performance for her work in the series. Orphan Black was created by award-winning director John Fawcett and award-winning writer Graeme Manson, and also stars award-winning actress Maria Doyle Kennedy (Mrs. S.), Dylan Bruce (Paul Dierden), Jordan Gavaris (Felix Dawkins), Kevin Hanchard (Detective Art Bell), and Skyler Wexler (Kira). Orphan Black is produced by Temple Street Productions in association with BBC AMERICA and Bell Media’s Space and is distributed internationally by BBC Worldwide North America.

“Orphan Black is exactly the type of smart, suspenseful TV show that our customers love to binge on,” said Brad Beale, Director of Digital Video Content Acquisition for Amazon. “It’s easy to see why Tatiana Maslany was nominated for a Golden Globe for her role in Orphan Black. We’re excited to offer the first and future seasons exclusively to Prime members at no additional cost, continuing our tradition of offering a wide variety of great content we know our customers will enjoy.”

“Prime Instant Video continues to be a great platform for viewers to enjoy our content, and we’re very pleased to make it the exclusive online streaming provider for every season of Orphan Black, starting with Season One,” said Matt Forde, EVP Sales & Co-Productions for BBC Worldwide North America. “Temple Street Productions along with Graeme Manson and John Fawcett have created an addictive, edge-of-your-seat series and now is the perfect time for subscribers to get on board and catch up on Season One before the series returns to BBC AMERICA in April.”

Amazon.com, Inc. (NASDAQ: AMZN), a Fortune 500 company based in Seattle, opened on the World Wide Web in July 1995 and today offers Earth’s Biggest Selection. Amazon.com, Inc. seeks to be Earth’s most customer-centric company, where customers can find and discover anything they might want to buy online, and endeavors to offer its customers the lowest possible prices. Amazon.com and other sellers offer millions of unique new, refurbished and used items in categories such as Books; Movies, Music & Games; Digital Downloads; Electronics & Computers; Home & Garden; Toys, Kids & Baby; Grocery; Apparel, Shoes & Jewelry; Health & Beauty; Sports & Outdoors; and Tools, Auto & Industrial. Amazon Web Services provides Amazon’s developer customers with access to in-the-cloud infrastructure services based on Amazon’s own back-end technology platform, which developers can use to enable virtually any type of business. Kindle Paperwhite is the world’s best-selling and most advanced e-reader. It features new display technology with higher contrast, the next generation built-in light, a faster processor, the latest touch technology, and exclusive new features designed from the ground up for readers. Kindle, the lightest and smallest Kindle, features improved fonts and faster page turns. The new Kindle Fire HDX features a stunning exclusive 7” or 8.9” HDX display, a quad-core 2.2 GHz processor, 2x more memory, and 11 hours of battery life, as well as exclusive new features of Fire OS 3.0 including X-Ray for Music, Second Screen, Prime Instant Video downloads, and the revolutionary new Mayday button. The all-new Kindle Fire HD includes an HD display, high-performance processor and dual speakers at a breakthrough price.

This announcement contains forward-looking statements within the meaning of Section 27A of the Securities Act of 1933 and Section 21E of the Securities Exchange Act of 1934. Actual results may differ significantly from management’s expectations. These forward-looking statements involve risks and uncertainties that include, among others, risks related to competition, management of growth, new products, services and technologies, potential fluctuations in operating results, international expansion, outcomes of legal proceedings and claims, fulfillment and data center optimization, seasonality, commercial agreements, acquisitions and strategic transactions, foreign exchange rates, system interruption, inventory, government regulation and taxation, payments and fraud. More information about factors that potentially could affect Amazon.com’s financial results is included in Amazon.com’s filings with the Securities and Exchange Commission, including its most recent Annual Report on Form 10-K and subsequent filings.

BBC Worldwide is the main commercial arm and a wholly-owned subsidiary of the British Broadcasting Corporation (BBC). The company exists to maximize the value of the BBC’s assets for the benefit of the UK license payer, and invests in public service programming in return for rights. Core activities in the U.S. include BBC AMERICA, Sales & Co-Productions, bbc.com, Consumer Products and BBC Worldwide Productions, the production arm responsible for the smash hit Dancing with the Stars.