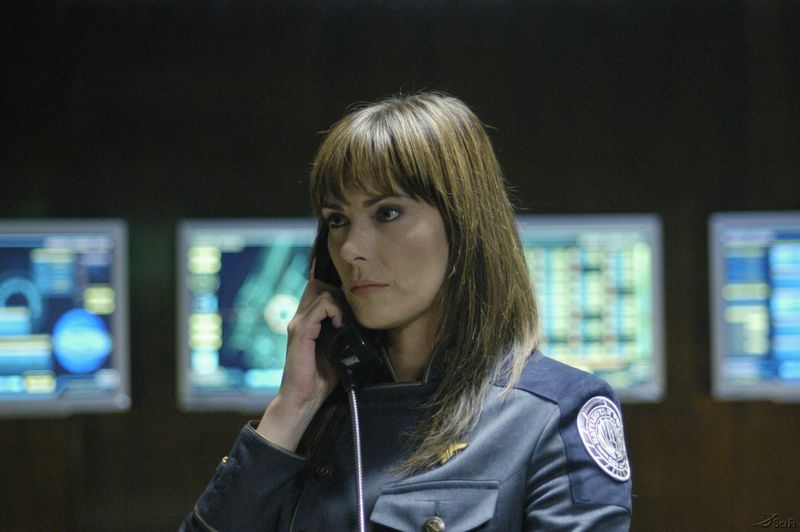 When I went to the mailbox earlier this week there was a little surprise in my box namely a Sci-Fi screener for Battlestar Galactica: Razor. I generally do not review Sci-Fi Channel screeners because I get them so early in the process that the shows are usually incomplete, they are good for background information but not really to review. Razor was the first screener I received from them that was actually complete and wow, did I like this movie. I’m ready for the next season of BSG.

Last year BSG started amazingly strong and just went downhill as the season progressed, so much so, that I really didn’t like the last 5 or 6 eps of the year, I was completely ambivalent about this new season. Especially after Sci-Fi decided to screw fans by breaking up the season into 2, showing only 10 lousy eps in Jan/February with the remaining airing in 2009! How crappy is that?

Anyway, I digress, while watching Razor the one feeling I couldn’t help but have is that this is the definition of filler: excellent filler, but kind of pointless within the context of the entire series. With that said, this does what it sets out to do and that’s wet your apatite for more BSG. The film reminds you of why BSG is probably the best Sci-Fi genre show that’s not on TV at the moment. The writing, tone, and acting in this is brilliant.

The ads and trailers for this are completely misleading. When I fired up the DVD I was expecting a film that jumps way back into the past and moves forward to tell all the various stories related to the doomed Battlestar Pegasus. What it really does is focus on 2 periods in Pegasus’ history – the period when Captain Lee ‘Apollo’ Adama (Jamie Bamber) took over the Pegasus’ and 10 months earlier, right before the Cylons first attack.

Razor’s entire story is told through the eyes of a Lt., Kendra Shaw (Stephanie Chaves-Jacobsen) who is young, wide eyed and eager to please. When she first boards the Pegasus you realize immediately how differently this ship is run from Galactica. She’s wondering around the hallways with her duffle bag thrown over her shoulders and no one bothers to help her. When she finally finds the bridge she has her first encounter with the tough as nails Admiral Helena Cain who immediately reams her out. But there’s a nice moment where Cain smiles and laughs after Shaw leaves. It’s one of the few, maybe only times, you see Cain’s playful side.

We find out how circumstances can affect people and force them to do things in war that they wouldn’t have done otherwise. What separates Adama from Cain is, in Adama’s words, he had a strong support system to keep him humble where Cain had no one, so all the decisions she made were in the best interest of her crew and everyone else be damned.

There’s a moment early on when her XO disagrees with her decision to risk the entire crew on a hair brained plan to attack, when they fall into an obvious trap and are hopelessly outnumbered, instead of calmly disagreeing with her right hand, she puts a gun to his head and pulls the trigger. That’s pretty hardcore, but it got her point across to the rest of the crew that she demanded discipline and people to follow her orders without question. Adama would have just stripped the guy of his command and thrown him into the brig until after the crisis.

Director Félix Enríquez Alcalá and producers Ronald D. Moore and Michael Taylor give old school Battlestar fans something to smile about, they bring back the original Cylons! The big silver and gold “toasters” with the single roving eye, they even show us the original Cylon Base Ships, the original fighters, the original 3 seated Cylons (in the fighters) and we even get the original roving eye sound effect. The overall affect just put a big smile on my face. Retro is cool man.

As far as the overall story of Razor goes, like I said earlier it’s about two different periods one where Lee takes over the Pegasus and 10 months prior when the Pegasus first escaped the initial attack. We get to see Cain make some tough decisions and at some points you are wondering if she’s making these decisions to survive or to get revenge. She gives a moving, rousing, “So Say We All” style rallying speech shortly after they get word that Caprica has been completely destroyed.

While watching it, I thoroughly enjoyed it, but kept wondering what the point of the entire film is, but then at the very end there is a MAJOR, MAJOR, REVEAL, SPOILER, SPOILER. If you scroll all the way down and use the invasion text you can find out what it is. And then there’s also another minor spoiler as it relates to the Cylons, it was something that the producers discussed during a recent visit to Vancouver. MINOR SPOILER ALERT IN INVISIO TEXT, MAJOR ONE AT THE BOTTOM Sci-Fi asked me to remove the spoiler. END SPOILER

All in all, definitely worth your time, but don’t let the upcoming Flashbacks fool you into thinking that they are going use the way, way back machine to show us Adama’s early days. This only takes up about 4 minutes in the entire thing. Adama actually has minimal role in this film.

Everything about Battlestar Galactica: Razor works really well, yes it’s too talky, but then BSG is a talky show. It really is its own stand alone entity and doesn’t shed a lot of light onto the rest of the series, but it’s still a great ride.

Be sure to check it out when it airs November 24, and check out the awesome Flashbacks which will air during Flash Gordon over the next 6 weeks. The 2 minute episodes will show young Adama discovering the Cylons early experiments with trying to create the human models. It takes place 41 years in the past.

SPOILER SO HUGE IT REQUIRES MY FIRST USE OF INVISIO TEXT

Sci-Fi asked me to remove the spoiler.ing “All this has happened before and will happen again, again, again….” BOOM!

6 thoughts on “Battlestar Galactica: Razor, is Amazing, – SO SAY WE ALL! Mostly Spoiler Free Review by Michelle Alexandria”