Elisabeth Halsey [Cameron Diaz] teaches school because of the three-months off and being able to get away with a minimum of actual work. When her engagement to a wealthy man – with an equally perceptive mother – falls apart, she retreats into her teaching job while trying to raise the funds for a boob job, figuring that if she’s got big ones, she’ll be more likely to snare a rich husband.

When a reasonably good-looking, rich substitute teacher, Scott Delacorte [Justin Timberlake], comes along, she sets her sights on him – but she has competition from the school’s best teacher, Amy Squirrel [Lucy Punch], who goes after him with the same manic energy she channels into her teaching job [a manic energy that plays into the movie in unexpected ways later on].

In the meantime, Halsey rebuffs the attentions of good-hearted gym teacher, Russell Gettis [Jason Segal], tramples over sweet colleague Phyllis Smith [Lynn Davies] and runs roughshod over her students when she isn’t ignoring them completely.

With funding her boob job her number one priority, Halsey is quick to take advantage of a school fundraiser – a car wash – and discovers an incentive to actually teach when she discovers the teacher whose class has the highest scores on the state exams wins a bonus: enough to cover the rest of her doctor’s fees for said boob job. 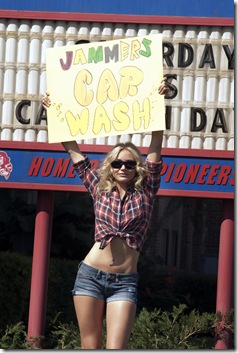 Diaz could play Halsey in her sleep and, with the exception of the car wash sequence, and a moment when she actually helps a student, she pretty much does. Essentially, she flips between an angry glower and flashing a big, dimpled grin [she’s so thin that if you put her in Jack Nicholson’s make-up from Tim Burton’s Batman, she’d make an even more credible Joker than he did].

Lucy Punch [Dinner for Schmucks] steals every scene she’s in with that manic energy I mentioned earlier. Her enthusiasm for her job – and for Delacorte – verges on the unhealthy and has a terrific payoff. Jason Segal’s Gettis is Amy Squirrel‘s opposite – laid back to the point where it seems that even getting shot down by Halsey just rolls off his back – but he also quietly mocks other characters in such a way that they never quite get it.

The rest of the cast [especially the talented Kaitlyn Dever, as the class brain/suck-up, and Matthew J. Evans as shy nerd Garret Tiara] are pretty much wasted – and we won’t even go into the movie’s plotholes and jerky rhythms.

Writers Gene Stupnitsky and Lee Eisenberg seem to think that a combination of f-bombs, rudeness and a dash of contrition are all you need to make an R-rated comedy work – and the performances by Punch and Segal almost bear them out. Unfortunately, that bit of contrition on Halsey’s part doesn’t really give the film the heart it needs while the vulgarity seems to be pulled back just a bit too much at every instance.

Most of Bad Teacher’s best moments are in the trailer [one or two are better in the movie simply because they aren’t dialed as far back as a G-rated trailer requires]. This is a big surprise because Jake Kasdan [Zero Effect, Walk Hard; The Dewey Cox Story] has done some impressive work. If Bad Teacher had been as on the edge as, say Walk Hard: The Dewey Cox Story, it might have been mythic.

Instead, it’s a fast-paced but narrow miss.