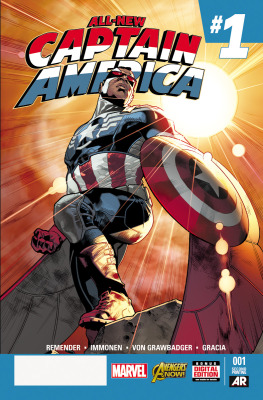 All-New Captain America, Superior Iron Man & Thor are smash hits! Exciting and ambitious, these Avengers NOW! titles are bringing seismic changes to some of Earth’s Mightiest Heroes, reinvigorating and recharging some of the most popular characters in all of fiction. Today, Marvel is pleased to announce that three of these hit titles have completely sold out and will immediately head back to press! Missed out on these energetic and action-packed comics the first time? Now is your chance to get your hands on ALL-NEW CAPTAIN AMERICA #1,SUPERIOR IRON MAN #1 and THOR #2 when they return to comic shops this December!

Be there when Sam Wilson dons the stars and stripes as the new Sentinel of Liberty, when Tony Stark unleashes Extremis on the city of San Francisco, and when the new Thor tests her mettle against a horde of angry Frost Giants! Don’t take our word for it – here’s what the critics had to say!

“Tom Taylor does have a knack for bringing out the worst in some of our greatest heroes…this is a title to keep an eye on.” – Comic Vine, on Superior Iron Man #1

The biggest creators are bringing you the biggest stories in comics and its happening NOW! Don’t miss your chance to get on board some of the most exciting comics in the industry when ALL-NEW CAPTAIN AMERICA #1, SUPERIOR IRON MAN #1 and THOR #2 return to comic shops in December!

About Marvel: Marvel Entertainment, LLC, a wholly-owned subsidiary of The Walt Disney Company, is one of the world’s most prominent character-based entertainment companies, built on a proven library of more than 8,000 characters featured in a variety of media over seventy years. Marvel utilizes its character franchises in entertainment, licensing and publishing. For more information visit www.marvel.com © MARVEL 2014