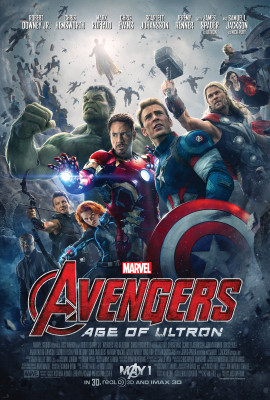 For Jimmy Kimmell Live: Avengers Assembled, the cast will talk about the new film (with as few spoilers as possible) and present world premiere clips of exclusive new footage. For more, follow the jump.

During the special episode, Kimmel will also split the cast up in a friendly game of “Avengers Family Feud.” Additionally, “Jimmy Kimmel Live’s” “Wall of America” will allow Marvel fans from across the country to have the opportunity to be a part of the show and interact with Marvel’s “Avengers: Age of Ultron” cast. The episode will also feature musical guest The War on Drugs plus many more surprises.

“Jimmy Kimmel Live” broadcasts from Disney’s El Capitan Theater, located on Hollywood Boulevard in the heart of the Walk of Fame. This location gives the show unique character that Jimmy showcases regularly by interacting with the local superheroes parading along the boulevard and challenging tourists outside to participate in live comedy bits.

Marvel’s “Avengers: Age of Ultron” stars Robert Downey Jr., who returns as Iron Man,  along with Chris Hemsworth as Thor, Mark Ruffalo as Hulk and Chris Evans as Captain America. Together with Scarlett Johansson as Black Widow and Jeremy Renner as   Hawkeye, and with the additional support of Don Cheadle as James Rhodes/War Machine, Cobie Smulders as Agent Maria Hill, Stellan Skarsgård as Erik Selvig and Samuel L. Jackson as Nick Fury, the team must reassemble to defeat James Spader as Ultron, a terrifying technological villain hell-bent on human extinction. Along the way, they confront two mysterious and powerful newcomers, Pietro Maximoff, played by   Aaron Taylor-Johnson, and Wanda Maximoff, played by Elizabeth Olsen, and meet an   old friend in a new form when Paul Bettany becomes Vision.

Written and directed by Joss Whedon and produced by Kevin Feige, p.g.a., Marvel’s  “Avengers: Age of Ultron” is based on the ever-popular Marvel comic book series “The  Avengers,” first published in 1963. Louis D’Esposito, Alan Fine, Victoria Alonso, Jeremy Latcham, Patricia Whitcher, Stan Lee and Jon Favreau serve as executive producers. Get set for an action-packed thrill ride when The Avengers return in Marvel’s “Avengers: Age of Ultron” on May 1, 2015.

Enjoy “Jimmy Kimmel Live” on the web at www.abc.com/JimmyKimmeLive and at youtube/JimmyKimmelLive.