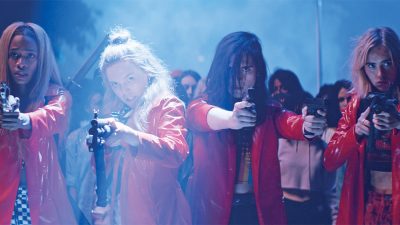 Assassination Nation is the story of how the internet brings a witch hunt back to Salem. It is brutally unsubtle and thrown together with a complete lack of nuance but is actually pretty effective at saying what it needs to say.

After half the town of Salem is hacked, the need for someone to blame is so great that the town goes mad and a kid who laughed at the town police and FBI’s attempt to find the source is accused and only survives being terrorized by kids from his high school by pinning the blame on someone else – Lily (Odessa Young) and her three best friends (who were also victims of the hack but that doesn’t matter at all) – Bex (Hari Nef), Sarah (Suki Waterhouse) and Em (Abra).

The next thing you know, the ‘good people of Salem’ (that’s a repeated phrase in the movie) are out to lynch the four of them – and it comes down to pretty serious violence before the true culprit is discovered.

Writer-director Sam Levinson gives us just enough time with the girls to give us a vague idea of who they are – plus he plants one suspicious series of texts that could help feed the paranoia about Lily.

The Hacking begins with the mayor’s LGBTQ secret (photos!) before moving on to the high school principal – because he has photos of his six-year old daughter in the bath, he’s deemed a pedophile.

One of the two commits suicide; the other is shouted down.

And then, suddenly, half the town is hacked and a birthmark on a girl’s back leads to Lily and the accusation that she did this.

Then he delivers – in as lurid a way as possible without throwing actual nudity in with the gratuitous bloodshed – and the result is a chaotic and angry lashing out at the casual racism, sexism and abuse of the internet we encounter every day.

If only it was so easy to fight with an arsenal of guns and swords…
Even though Lily is the character in the film that’s close to be well drawn, the sheer weight of the pain about to rain down on her makes us feel for her – and when she and her friends fight back (following a very pointed speech in front of an American flag), we want them to win.

From Day-Glo chyrons to the casualness with which the girls post to the internet all their texting conversations and photos; from the outrage at the town mayor having a secret life to Lily being thrown out of her home by her parents – because of a hack that victimized her as much as anyone, Assassination Nation punches above its weight in terms of getting its message out as directly as possible.

If there’s no subtlety or nuance, it just might be because there’s so little of it in the real world these days – and sometimes you hit people with a mallet to get their attention.