Ant-Man will likely be the best superhero movie of the year. Following in the wake of the huge Avengers: Age of Ultron, it was a canny move for Marvel to go small – it enabled the Peyton Redd directed movie to cheerfully subvert superhero movies while being a terrific one itself.

As an Edgar Wright fan, I can tell you that his fingerprints are all over the movie – who else would’ve come up with the idea to spoof every movie fight on a moving train ever in such a crazy way? Am I right? But while Ant-Man may not have the unique flourishes Wright might have provided, it still strikes almost all the right notes to be the most loopily funny and purely entertaining Marvel movie not called Guardians of the Galaxy.

With a script credited to Edgar Wright & Joe Cornish and Adam McKay & Paul Rudd, my bet is that McKay and Rudd merely honed the film’s voice to suit Rudd’s particular skill set.

As it is, the finished product provides a lovely explanation for why we’ve never heard of Ant-Man in the Marvel Cinematic Universe, while simultaneously setting up key building blocks for the MCU. 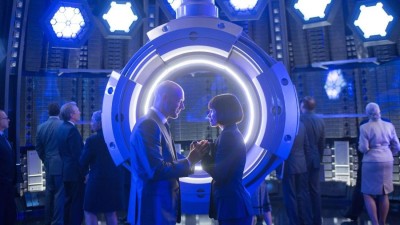 Forty-odd years ago, Dr. Henry ‘Hank’ Pym (Michael Douglas) invented the Pym particle, which led to the discovery of way to shrink the distance between atoms –et voila, shrinking superhero. Ant-Man went on many clandestine operations before suddenly hanging up his Ant-Man suit and retiring (part of his reason for retiring was Howard Stark’s efforts to get the formula (and the suit).

A SHIELD agent present on the day Pym quit, Mitchell Carson (Martin Donovan) shows up in the present when Pym’s former protégé, Darren Cross (Corey Stoll), finally cracks the problem of the suit – code named Yellowjacket – and engineers its sale to Hydra.

Which brings us to Scott Lang (Paul Rudd), a hi-tech cat burglar who went to prison for breaking into a bank, hacking its system and returning the money it had stolen from thousands of people by entirely legal means (rounding up transaction costs by a thousandth of a cent and such like).

By ‘chance,’ when he loses a job because they find out he’s an ex-con (Baskin-Robins always finds out) his friend and criminal associate, Luis (Michael Peña) turns him on to a job stealing from a retired rich guy – which leads him to meeting Pym and Pym’s adorable (read: angry) daughter, Hope Van Dyne (Evangeline Lilly). And Pym winding up back in jail before Pym engineers his escape. 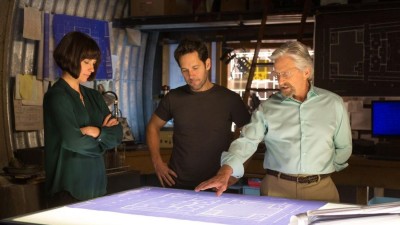 Pym wants Lang to use the suit to steal Cross’ technology before he can sell it. Hope wants to do it, but Hank simply won’t let her use the suit though the fact that she works for Cross and has won his trust is incredibly helpful.

What persuades Lang to take on this job is that he wants to be able to go straight and see his daughter, Cassie (Abby Ryder Fortson) – something her mom (Judy Greer) and cop boyfriend (Bobby Cannavale) won’t allow until he has proven himself capable of holding down a job and paying child support.

In short, Lang is willing to save the world if it means he can see Cassie again.

Ant-Man is notable for some great special effects – I guarantee you’ve never seen a training montage like this one before – and the security at Pym Industries is wondrous (as are Lang’s efforts to get through it with the aid of Luis and two more buddies: Tip ‘TI’ Harris’ hacker Dave and David Dastmalchian’s laconic Russian, Kurt). 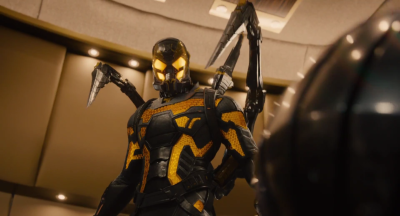 Fight sequences involving a guy who can change size at will are somewhat dizzying on an IMAX screen (which also makes the film’s solid 3D effects even cooler) and extremely cool. Some of the best sequences involve the ant-sized Lang – his ‘test run’ is spectacular; his work with the ants (wait! Did I not mention he could telepathically control ants? D’OH!) is big fun (especially when he’s underground, in the sewers, or water pipes).

Best line in the movie: ‘I fought an Avenger and didn’t die!’

One of the coolest things in the comics (Ant-Man, getting small since 1962!) was when he’s ride a flying ant – and it works just as well in the movie. Here he develops a bit of affection for his steed, changing its name from ‘247’ to Antony (best ant pun of the day).

Of course there are the requisite Easter eggs for long-time fans (like the Milgrom Hotel – I think I was the only to spot it – I was certainly the only one who laughed out) and the now mandatory Stan Lee cameo, made even funnier than usual through a clever device that I won’t describe. It’s best that you see it for yourselves. 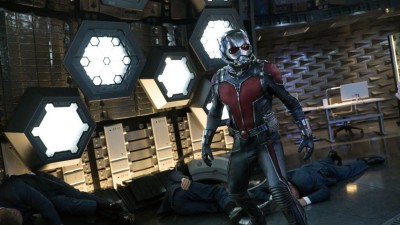 Reed has the right feel as a director – he keeps things moving at a Marvel kind of pace (quick, but not too quick – you’ve get to hit the character beats just so…) and gets fine performances from everyone involved (Michael Douglas looks like he hasn’t had this much fun in decades).

Considering how wary I was of Ant-Man following the departure of Wright, my opinion of the film may be an over-reaction, but I don’t think so. This movie is as much fun as Iron Man 3, the first Avengers movie, and Captain America: The First Avenger – and is not that far behind Guardians of the Galaxy.

Don’t forget to stay for the movie’s two tags during the end credits – the one just after the major credits bodes really well for a second Ant-Man film and the second, well let’s just say that it plays heavily into an upcoming Marvel movie and does what all good teases do – it makes you want the next movie right, bloody now!