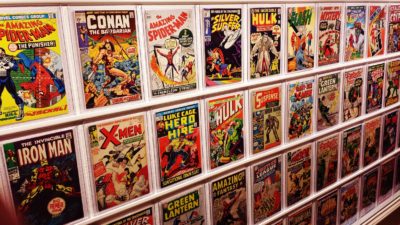 Comic Books seem to be taking over the world – the Marvel Cinematic Universe, the DCTV Universe and the Walking Dead Universe are only the beginning.

But where did they come from? And why are they so influential?

AMC has greenlit a documentary series exploring the history of comics – under the working title of Heroes and Villains: The History of Comic Books, the six hour-long episodes will explore ‘stories, people, and events that have transformed the world of comic books.’

Heroes and Villains: The History of Comic Books will be executive produced by Robert Kirkman and David Alpert through their Skybound Entertainment for a 2017 premiere. Follow the jump for details.

NEW YORK, NY – May 17, 2016 – AMC announced today that it has greenlit the documentary series, “Heroes and Villains: The History of Comic Books,”(Working Title) to be executive produced by Robert Kirkman and David Alpert (“The Walking Dead”) through Skybound Entertainment. The series is slated to premiere in 2017.

The six-part one-hour documentary series will explore the stories, people, and events that have transformed the world of comic books. Using a distinctive filmmaker approach, the series takes a deep dive into the most accessible and often subversive modern popular art form. From origin stories to the untold history behind iconic characters, “Heroes and Villains” will explore a wide range of topics including: pop culture, politics, race, gender and sexuality.

“We are incredibly excited to continue our partnership with Robert, David and Skybound. Beyond The Walking Dead and Fear the Walking Dead, they are prolific producers and publishers who have an amazing knowledge of comic book history and genre storytelling,” said Joel Stillerman, president of programming, AMC and SundanceTV. “We believe going deep into the history behind some of the greatest comic books will be of great interest to this audience.”

“At the end of the day I am a comic fan first and foremost. I am a lover of the medium and the stories it enables people to tell,” said Robert Kirkman, CEO, Skybound Entertainment. “I’m excited to partner with AMC once again to bring the stories of some the most influential people in comics to a television audience.”

In 2010, The Walking Dead creator Robert Kirkman saw an opportunity to start a company that would nurture creators and give them resources to produce content while retaining creative control of their properties. Partnering with longtime collaborator, and fellow executive producer of “The Walking Dead” television franchise David Alpert, Skybound Entertainment was born. Since opening its doors Skybound Entertainment has grown into a multiplatform entertainment company. Television projects under the Skybound umbrella include AMC’s “The Walking Dead” and “Fear the Walking Dead,” Cinemax’s “Outcast,” and the newly announced project “Mastermind.” Film projects include the 2015 film, “AIR” and forthcoming projects as part of the companies two-year first-look deal with Universal.