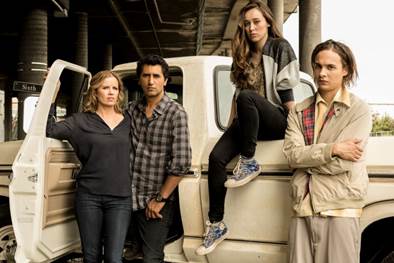 AMC is premiering Fear the Walking Dead on Sunday, August 23rd with a ninety-minute episode.

The series is set in Los Angeles and covers the period of time when, back in Georgia, Rick Grimes was in the hospital in a coma. The central point of view is that of a newly blended family that is still a ways from working all its issues – as the apocalypse begins.

“‘Fear The Walking Dead’ has art on its addled mind, and is all the better for it.”—Ken Tucker, Yahoo.com

“Dickens and Curtis shine in these early episodes – her actions convey that she’ll be a survivor no matter what, and his indicate that he’s got some Rick Grimes can-do as well.” —Tim Goodman, HollywoodReporter.com

FOR IMMEDIATE RELEASE – Tune in for the worldwide premiere of AMC’s highly anticipated new series “Fear the Walking Dead” launching Sunday, August 23rd at 9:00 p.m. ET/PT.  Living in the same universe as “The Walking Dead,” “Fear the Walking Dead” is a gritty drama that explores the onset of the undead apocalypse through the lens of a fractured family. Set in a city where people come to escape, shield secrets, and bury their pasts, a mysterious outbreak threatens to disrupt what little stability high school guidance counselor Madison Clark (Kim Dickens) and English teacher Travis Manawa (Cliff Curtis) have managed to assemble. The everyday pressure of blending two families while dealing with resentful, escapist, and strung out children takes a back seat when society begins to break down. A forced evolution, a necessary survival of the fittest takes hold, and our dysfunctional family must either reinvent themselves or embrace their darker histories.

On the extended 90-minute premiere episode – written by Robert Kirkman and Dave Erickson, and directed by Adam Davidson – a highly dysfunctional blended family is forced together when they realize a reported virus is actually the onset of the undead apocalypse.

For additional information regarding “Fear the Walking Dead”, please visit the AMC press site at www.press.amcnetworks.com.

Whether commemorating favorite films from every genre and decade, or creating acclaimed original programming, AMC brings to its audience something deeper, something richer, Something More. The network reigns as the only cable network in history ever to win the Emmy® Award for Outstanding Drama Series four years in a row with “Mad Men,” and six of the last seven with current back-to-back honoree, “Breaking Bad.” The network boasts the most-watched drama series in basic cable history and the number one show on television among adults 18-49 for the last three years with “The Walking Dead.” AMC’s current original drama series include “Mad Men,” “The Walking Dead,” “Better Call Saul,” “Hell on Wheels,” “TURN: Washington’s Spies,” “Halt and Catch Fire,” “HUMANS,” and the forthcoming “Fear the Walking Dead,” “Into the Badlands” and “The Night Manager.” AMC also explores authentic worlds and discussion with original shows like “Talking Dead,” “The Making of The Mob: New York” and “Comic Book Men.” AMC is owned and operated by AMC Networks Inc. and its sister networks include IFC, SundanceTV, BBC America and WE tv. AMC is available across all platforms, including on-air, online, on demand and mobile. AMC: Something More.