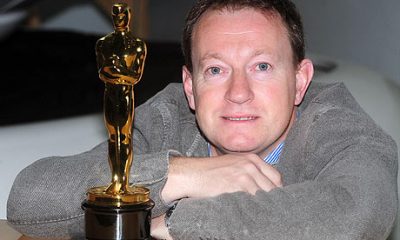 Following the success of The Night Manager (3 Golden Globes wins), AMC is partnering with the BBC on a new John Le Carré adaptation: The spy Who Came in From the Cold.

Set in 1962, just after the building of the Berlin Wall, Spy centers on Alex Leamas, a British intelligence officer whose network has fallen apart.

LOS ANGELES, CA-January 14, 2017 – On the heels of three Golden Globe wins for “The Night Manager,” AMC & the BBC announced today that they will team up again with The Ink Factory for a television adaptation of John le Carré’s best-selling novel “The Spy Who Came in From the Cold.”  “The Spy” is being distributed internationally by Paramount and adapted by Academy Award winner Simon Beaufoy (“Slumdog Millionaire”). It will be produced in association with Character 7.

It is 1962: the height of the Cold War and only months after the building of the Berlin Wall. Alex Leamas is a hard-working, hard-drinking British intelligence officer whose East Berlin network is in tatters. His agents are either on the run or dead, victims of the ruthlessly efficient East German counter-intelligence officer Hans-Dieter Mundt. Leamas is recalled to London- where, to his surprise, he’s offered a chance at revenge. But to get it, he may have to stay out in the cold a little longer…

“The Spy Who Came in from the Cold” was written in 1963, and on release topped the New York Times best seller list for 32 weeks. In 1965, le Carré’s novel was made into a film directed by Martin Ritt and starring Richard Burton, Claire Bloom, and Oskar Werner.

“I’m very excited by the project, and have great confidence in the team,” said John le Carré.

“John le Carré is one of the master story-tellers of our time, and to have the opportunity once again to put his page to our screen is an absolute privilege,” said Joel Stillerman, President of original programming and development for AMC and SundanceTV.  “Spy” is a deep tale of intrigue in one of the most uncertain times in history. We’re very much looking forward to continuing our great partnership with Ink Factory and BBC as well as Paramount Television.”

Piers Wenger, Controller of BBC Drama says, “Following the huge global success of ‘The Night Manager,’ it’s a privilege to announce that John Le Carré will return to BBC One with one of the best spy thrillers ever written. Adapted by Simon Beaufoy, ‘The Spy Who Came In From The Cold’ is utterly timely in its evocation of the Cold War period and we are thrilled to be working with The Ink Factory and AMC again to bring this seminal novel to the screen for another unmissable drama series on BBC One.”

“We are thrilled to be teaming again with AMC and the BBC to adapt this extraordinary work for television. It’s wonderful to have the opportunity to build on the relationships that delivered ‘The Night Manager’ to an audience worldwide.  ‘The Spy Who Came In From The Cold’ is an utterly gripping story, and one of the great books of the twentieth century. We are looking forward enormously to bringing it to a twenty-first century audience,” said Simon Cornwell of The Ink Factory.

The winner of two Emmys, including best director Susanne Bier, “The Night Manager” was also the most awarded series at the 2017 Golden Globe Awards, winning Best Performance by an Actor in a Limited Series for Tom Hiddleston, and Best Performance by a Supporting Actor & Actress for Hugh Laurie and Olivia Colman. “The Night Manager” has been honored with 12 Emmy nominations, five Critics Choice Award nominations and four Golden Globe nominations.

The Ink Factory is represented on “The Spy Who Came in From the Cold” by John LaViolette at Bloom Hergott, and by Chris Rice and Theresa Kang at WME.

Simon Beaufoy is represented by Charlotte Knight at Knight Hall Agency and Susan B. Landau at Thompson Street Entertainment.

Stephen Garrett is represented by Theresa Kang and Chris Rice at WME.