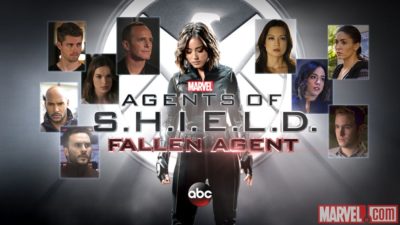 Clark Gregg as as Phil Coulson

Ming-Na Wen as Melinda May

I had the wonderful opportunity of interviewing these talented cast members. Between witty banter and chatting with talent I admire, they gave insight on season 3, audition stories, and shout outs to Eclipse Magazine readers. Here is a transcription of the interviews:

Luke:  How are you doing?

Pretty good! So, things have been brewing between Daisy and Lincoln.  Did you expect it to come to the point it is now?

Luke:  There were a few things pointing in that direction.  When I auditioned…

Chloe:  We did a chemistry read when we auditioned. I actually didn’t know any of my lines! (laughing)

Luke:  I had to pretend to use my powers to lift her up.

Chloe:  It was actually the most awkward audition scene.

Luke:  They always are.

Chloe:  Because we had to say (she grabs Luke’s hand) “It tingles”.  I had to say that in this tiny room while I had the script because they didn’t give me the script until right then.  Felt bad that I was doing some pretty horrible acting for Luke’s big audition, but I went out there, and went, “That’s the guy!”

Luke:  She didn’t even know I was Australian.

Chloe:  I didn’t. I didn’t.  I said that’s the guy.  That’s the one. But is there an Australian that’s auditioning?  Because I really like Australians. And they’re like, “That was him.”

As far as the rest of this season, what could we expect to see?

Chloe:  Everyone is pretty happy the rest of the season.

Luke:  Long walks in the park.

Chloe: Playing with puppies… No, it gets really, really, really crazy and we haven’t even gotten to the finale yet.  We shot several finale worthy episodes already.

Luke: I’m trying to think of which episode where it gets cranked up a notch.

Luke:  Seventeen.  So there’s a point of no return, and then it speeds up.

Chloe:  I’m nervous for people to watch it actually.

Luke:  I’m nervous to watch it.

Were you ever into comic books before Agents of S.H.I.E.L.D.?

Luke:  Not overly.  I’ve always loved super heroes.  I was never a comic book nerd as such.  But I’ve been purchasing comic books. It’s a fun role to play.

Chloe:  I’ve been obsessed with Harry Potter and I actually have seven year old journals with me.  I was ten years old.  I basically grew up with them.  I really wanted to be Hermine.  I’m still trying.  I actually went to London just to try but the movies were already being made so it didn’t make any sense.  X-Men.  I love the movie. Jean Grey is my favorite.  Obviously when you start working for Marvel, “Here’s nine-hundred comic books.  Read them all!”  So you get it done.

So before you did the role, did you have to read the comics?

Luke:  They slap you across the face with it.

Colby:  Read it!  (laughing) When we first got cast for the pilot, they sat the whole cast done.  We had a day of Marvel learning.  We each had a name tag and a giant stack of comic books.  S.H.I.E.L.D. comics. DVD’s.  It was really cool.

If you had to do a shout out to the readers of Eclipse Magazine, what would you say?

Colby:  Tune in because Luke is so handsome.

Chloe:  That’s the best part of our show.

Luke:  There’s some really cool comic book moments coming up you should definitely tune in for.

Chloe:  I have a really fun new fight sequence which I’m excited for. You’ll see some static… action.  And it gets crazier and crazier.  You’re going to need adult diapers.  So go pick them up. Go to Costco. Pick up a large thing of them because you are going to shit your pants.

Luke:  Lincoln gets angrier and angrier. Kind of like the hulk.

Chloe:  Yes.  He actually turns into the hulk. Our big announcement is he is Mark Ruffalo.

Hello! You’re my hero! I’ve been following your career ever since Joy Luck Club.

Ming-Na: Oh we grew up together!

Yeah!  It’s amazing.  You don’t see a lot of Asians on tv.  It is celebrating diversity and an Asian female playing a strong kick-ass female character doing all these stunts on television.

Ming-Na:  Thank you! I’m just thankful I’ve been able to do it and I’ve been given the dream role on Marvel’s Agents of S.H.I.E.L.D. playing Agent May. I love her to pieces. I’m glad this body is still able to move after each fight scene.

You do most of your stunts?

Ming-Na: Yeah, we do about 80 to 90% of them and it’s really difficult not to. Back in the old days you could fake it.  You could do a pose and have your stunt person do all the fights.  But now with digital, everybody is able to do stop motion to slow things down.  It is a lot harder not to be in the action because people can really see, “That’s not her at all!”.  We have an amazing  stunt team. When they have to run into a wall or in front of a moving car, anything that’s very  dangerous–I let them do!

Have you ever gotten injured?

Ming-Na: Oh yeah.  I’ve been nursing an injury to my shoulder pretty much all season.

All for the sake of Agent May.

Compared to season one and the current season, have you seen a change in the character arc?

Ming-Na:  Yeah, you really get to see May’s backstory. Before, she was madly in love with Andrew.  She was hopeful starting her family, maybe leaving S.H.I.E.L.D … There were all these other aspirations that she had.  Sort of an innocence.  Afterwards… it took a toll on her mental health and she definitely had post traumatic syndrome.  It’s kind of wonderful to be able to play characters who are so fantastical in one way as far as their skills are concerned.   And at the same time, there is such a humanity to each and every one of our characters.

Over time, she kind of gotten hardened but she still has a soft spot.

Ming-Na:  You can tell that she absolutely cares about her team-about Coulson…And really upholding the SHIELD promise protecting the innocent and protecting the country or world really from the evil forces that are out there.

We were talking about diversity earlier.  When you first got the role of Agent May, how did it feel to be this kickass Asian female?

Ming-Na: I’ll tell you what. I was really, really happy when I got that phone call!  The real credit goes to our producers. Our executive producer Maurissa Tancharoen, Josh Whedon, Jeff Whedon, Jeff Bell.   Jeph Loeb.  My character wasn’t written specifically for an Asian. In fact her character name in the beginning was Agent Delfia Rice.  After they cast me for the part, they realized, “I think we need to change the last name–to Ramen.” No I’m just kidding! (laughing)

Your character is amazing and adds so much to the team.

Ming-Na: Thank you so much. And I’m happy I’m your hero. I love hearing things like that.

And to see another Asian on Tv.  Thank you so much.

Lots of great things happening on Agents of S.H.I.E.L.D.!

Phil Coulson is going through a lot.  What is the main thing we can expect to see in his character this season?

Clark:  The main thing is there is a war going into the mid-season.  They seem to be aware there is an evil force out there.  But I don’t think they realized, or he has realized yet, that that evil force is inhabiting the body of Graham Ward.  You have to blame Phil Coulson that there was a body.  There is an unspeakable evil devouring the planet. It’s my fault.  Sorry!

(laughing)  Well, if you could do a shoutout to the readers of Eclipse Magazine, what would it be?

Clark: What’s up Eclipse! Thanks for watching Marvel’s Agents of S.H.I.E.L.D. 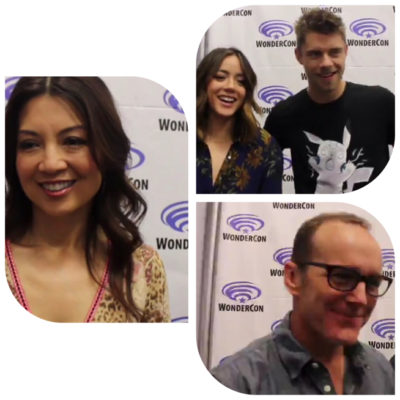 If you have made it this far down the article, then either a) you already saw the season finale or b) you love jumping to the ending of stories right away.  In any case, yes, Lincoln is indeed the fallen agent.   Interestingly enough, as evil as Hydra had been, even he had a few seconds of humanity, twisted as it was, before the ship exploded.  As you have seen throughout the series, you never know when a character will suddenly get killed off, or switch to the dark side.  Once again, this show ended in the same fiery glory as the ship bearing Lincoln and Hydra.  It was action packed with tender moving moments such as the one between agent May and Daisy or the tearful conversation between Daisy and Lincoln. It was a Kleenex moment.  And the softer side of Phil Coulson surfaced as he talked to Hydra about his devotion to his team. Okay, it was hologram, but still!  Overall, the perfect ending to another great season.

Agents of S.H.I.E.L.D. fans will be happy to know that the show has been picked up by ABC for another season.  Has Daisy left the Agents of S.H.I.E.L.D. for good? Is Lincoln and Hydra really dead? My Game Of Thrones theory that John Snow was alive last year was true as predicted, although I’m not as sure in this case.  What has happened to the other agents of S.H.I.E.L.D. since the untimely death of Lincoln? I guess we need to wait until the season 4 premiere. Until then, happy tv watching!