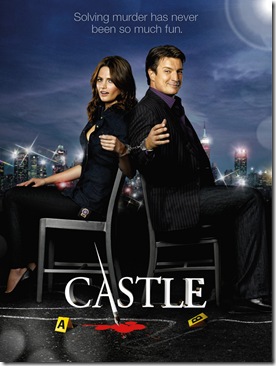 A solid mix of promising new series and proven returning hits helped the network achieve a strong start to the 2010-11 TV season. Season to date among Adults 18-49, ABC delivers 4 of the Top 10 highest-rated TV shows, the most for any network, including the Top 2 scripted programs. In fact among young adults, the network claims TV’s No. 1 comedy (“Modern Family”), the No. 1 drama (“Grey’s Anatomy”) and the No. 1 unscripted series (“Dancing with the Stars”). In Total Viewers, the network airs 2 of the Top 4 programs, including America’s No. 1 most-watched TV show overall with “Dancing with the Stars.” Led by Emmy-winning “Modern Family,” ABC’s 2-hour Wednesday night comedy block continues to resonate with viewers in its second year, surging by 15% in Total Viewers and by 14% in the key Adult 18-49 sales demographic from the same point last season.

When viewers first met Richard Castle — a famous mystery novelist and divorced father raising his teenage daughter, while being kept grounded by his Broadway diva mother — he was creatively blocked. But when the NYPD questioned him in connection with a series of murders staged to imitate crime scenes from his books, Castle found inspiration in NYPD Detective Kate Beckett, a bright and aggressive homicide detective with a fascination for odd and offbeat cases stemming from the years-old unsolved murder of her own mother. Though they instantly clashed, sparks of another sort began to fly, leading both to danger and a hint of romance as Castle stepped in to help find the copycat killer. Once that initial case was solved, Castle and Beckett continued to investigate strange homicides in New York, combining Castle’s writer intuition and Beckett’s creative detective work.

Courteney Cox stars as Jules Cobb in her Golden Globe®-nominated role as a recently divorced mom in her forties facing the often humorous challenges, pitfalls and rewards of life’s next chapter. Along for the journey are her son – a college freshman — ex-husband and friends who, together, make up her dysfunctional but supportive and caring extended family… even if they have a funny way of showing it sometimes.

“Grey’s Anatomy” is the recipient of the 2007 Golden Globe® Award for Best Television Series – Drama, and multiple Emmy nominations, including two for Outstanding Drama Series.

The doctors of Seattle Grace Hospital deal with life-or-death consequences on a daily basis – it’s in one another that they find comfort, friendship and, at times, more than friendship. Together they’re discovering that neither medicine nor relationships can be defined in black and white. Real life only comes in shades of grey.

Two-time Emmy winner Patricia Heaton stars in this warm and witty single-camera comedy about raising a family and lowering your expectations. Middle-aged, middle class and living in the middle of the country in Orson, Indiana, Frankie Heck is a harried wife and working mother of three who uses her wry wit and sense of humor in an attempt to get her family through each day intact. Her work life’s no easier. With her friend and co-worker, Bob, she struggles day to day as the least successful sales woman at the town’s only surviving car dealer. Frankie’s unflappable husband, Mike, is manager at the local quarry and her sardonic partner in the daily grind that is raising their average – yes, most definitely average – family.

Between juggling shifts and picking up fast food dinners eaten in front of the TV, Frankie and Mike raise their kids with love, humor and solid Midwestern practicality. Axl, the oldest, is a teenage jock who eats them out of house and home and walks around the house in his underwear. Then there’s Sue, their extraordinarily ordinary teen daughter, who fails at just about everything she tries with great gusto – although she’s hoping her recent acceptance on the school’s beleaguered no-cut cross country team might just turn things around. And last is Brick, their quirky third-grader, who reads constantly, whispers to himself and has a best friend who’s his backpack. But through all the madness shines a loving family, and together, the Hecks are putting THE MIDDLE on the map.

“The Middle” was created and is executive produced by Eileen Heisler and DeAnn Heline. The series is from Warner Bros. Television.

ABC’s Emmy Award-winning hit comedy “Modern Family” takes a modern and often hilarious look at the complications that come with being a family today. Jay Pritchett, with his much younger wife Gloria and her son Manny, sits as the patriarch of a large blended family that includes his grown daughter Claire, who has three kids of her own with her husband Phil, and a grown son Mitchell, who adopted a Vietnamese baby with his gay life partner Cameron. These three families are unique unto themselves, and together they give us a window into the sometimes warm, sometimes twisted embrace of the modern family.

The series is produced by Twentieth Century Fox Television in association with Levitan Lloyd Productions. Steven Levitan and Christopher Lloyd are executive producers/creators.

From Shonda Rhimes, the Golden Globe-winning creator of “Grey’s Anatomy,” comes the story of a team of gifted doctors working together to change the lives of their patients for the better as they look to one another for friendship and love.

The doctors of Oceanside Wellness and Pacific Wellcare work on the most difficult cases, patients whose medical needs often pose moral and ethical dilemmas. Though they may heatedly disagree at work, and though their personal lives may complicate matters, at the end of the day they are the best of friends , always ready to be there for each other.