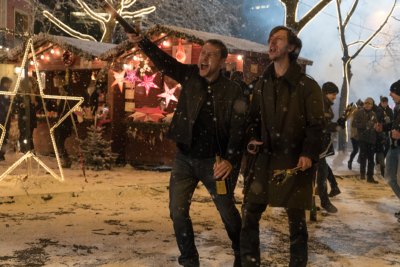 Quite possibly the strangest new series anywhere, Sense8 posits a unique kind of human evolution where cells of eight people around the world are so completely connected that they can see, hear, and feel what each is thinking, feeling, doing.

Christmas is the one holiday that brings some people closer together and makes others feel more alone than they’ve ever been – making a Sense8 Christmas Special not so much a ‘why?’, but an ‘of course.’

Netflix has just released a trailer for the two-hour special – and a holiday message from Executive Producer/Co-Creator Lana Wachowski. Watch them both after the break..

Sense8: A Christmas Special premieres on Friday, December 23rd. Season two of Sense8 premiere on My 5, 2017.

Sense8: A Christmas Special launches globally on Netflix on Friday, December 23 at 12:01am PT.

The season two story continues with ten new episodes launching globally on Friday, May 5 at 12:01am PT.

The journey continues as these eight singular hearts and minds weave in and out of each other’s lives finding deeper connections, learning darker, more desperate secrets about one another and struggling to identify with more than just oneself.

Picking up where season one left off, Capheus, Kala, Lito, Nomi, Riley, Sun, Will and Wolfgang come together both physically and mentally, plunged into the middle of each other’s tragedies and triumphs. On the run from Whispers, and forced to question their very identity, it’s a matter of survival as the Sensates must find a way to live with, understand and protect one another against all odds.