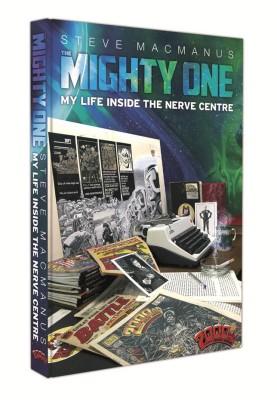 To North American audiences, the name Steve MacManus might not mean much, but without him, there would be no Watchmen, Image Comics (if it existed at all) might look very different and such British import faves as  The Ballad of Halo Jones, Bad Company, or Pat Mills and Kevin O’Neill’s Nemesis the Warlock would never have been – and the British Invasion that rejuvenated North American comics might well have not happened either.

Now, 2000 AD has added The Mighty One: My Life Inside the Nerve Centre, a memoir by Steve MacManus to its fall slate with a limited edition hardcover and a standard paperback edition hitting the shelves on September 8th. Pre-orders will be taken beginning  January 27th. Follow the jump for details.

2000 AD is to publish the memories of arguably its most definitive editor – Steve MacManus.

In 1973, a twenty-year-old Steve MacManus joined Fleetway Publications in London as a sub-editor on one of the UK’s top adventure titles, Valiant.

Within six years, he would rise to become editor of the company’s most celebrated weekly, 2000 AD, shepherding it through its first ‘Golden Age’ as he commissioned numerous hit series such as The Ballad of Halo Jones, Sláine, Bad Company, Rogue Trooper, and Nemesis the Warlock, ensuring its place as the most influential comic Britain has ever produced.

While 2000 AD’s creator, Pat Mills, set the tone and direction for the legendary title, for many MacManus remains the multi-award-winning SF anthology’s definitive editor.

Now, in the warm and witty memoir, The Mighty One: My Life Inside The Nerve Centre, MacManus lifts the lid on the fiercely creative environment that was British comics in the 1970s and ‘80s.

From the hugely successful launch of Battle to the controversial censoring of Action, from the brief life of Starlord to the stellar rise of 2000 AD and Judge Dredd, he details the personalities at play and the corporate politics and deadline battles he and others engaged in on a daily basis.

With keen insight, MacManus reveals how against all odds 2000 AD defined comics for a generation and became a global phenomenon – one that would spearhead a revolution in the graphic arts that is still felt today.

On 8th September 2016, 2000 AD is publishing both a special signed hardback edition (limited to 200 copies) for £20 – available only from its online shop – or a standard paperback edition for £9.99, available from all good book shops and Amazon.

You can pre-order either edition direct from shop.2000ADonline.com from Wednesday 27th January.

MacManus said: “It was when I began to come across people on the Internet warmly remembering their weekly comics of the 1970s. I realised I had had a ringside seat at the creation and development of many of those pioneering titles, so I sat down to see if I could turn my memories into something equally enjoyable. I also hoped my recollections would enhance the general appreciation of British comics publishing at the time. It was fantastic to be reminded of all the inimitable creators whose combined talents made 2000 AD the galaxy’s greatest comic – week in week out. I reread every Prog from 1 up to 500 and that was a cathartic experience for sure. But I made it, Marg! Top of the Progs! “

Ben Smith, head of books and comic books at Rebellion Publishing, said: “When Steve MacManus got in touch to say he had written a memoir I practically bit his hand off to get hold of it, such is the respect he is held in by myself and everyone at 2000 AD. That he was capable of writing such an engaging and funny autobiography did not surprise me. What did was his fresh insight into a definitive time in British comics history and the enthralling inside story of the era that marked the foundation of modern comics.”