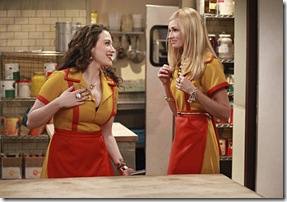 Max [Kat Dennings [Thor] is the kind of coolly smartass waitress that does not suffer fools – or rude customers – at all. Her dressing down of a twit who thinks snapping his fingers to get a waitress’ attention [and make no mistake about it, we’re dealing with waitresses here – not ‘servers’] and his equally uncool pal is a burst of manic comedic joy.

When she has to deal with training the new, obviously untrained Caroline [Beth Behrs], she is appalled when Caroline doesn’t even know what ‘marrying the ketchups’ means – until she learns why this obviously posh young woman is trying to get a job as a waitress. She’s the daughter of a Bernie Madoff type whose family’s assets have been frozen and she could only take what she could carry [‘…and I made all the wrong choices’]. Trouble intrudes when Max, in an uncharacteristic burst of charity, lets Caroline crash at her place [which sets up a genuinely funny exchange]. Max’s boyfriend hits on Caroline!

One of the reasons why 2 Broke Girls is genuinely funny – in spite of its being the product of so many influences – is that both women are intelligent and have vastly differing areas of expertise [Max has her job, her neighborhood and the people she has to deal with completely figured out; Caroline has a business degree and sees opportunities where Max sees just another obstacle [think: cupcakes].

Max gets all the good wisecracks, but Caroline’s observations about her new environment [not to mention her current predicament] show that she is the bubble-headed blonde we are expecting.

The supporting cast – Garrett Morris as Earl, who seems a permanent fixture just inside the diner’s entrance; Matthew Moy as diner owner Han Lee, who wants people to call him Bryce; and Jonathan Kite as Oleg, the short order cook who thinks he’s a playa [he is so not!] – are sketched in well enough in the premiere that we feel like we know them already.

Plus, there’s a horse! Really!

Of all this fall’s new sitcoms, 2 Broke Girls is the one that kept me laughing throughout – while occasionally [and simultaneously] tugging at the ol’ heartstrings. Seriously, this is appointment TV.