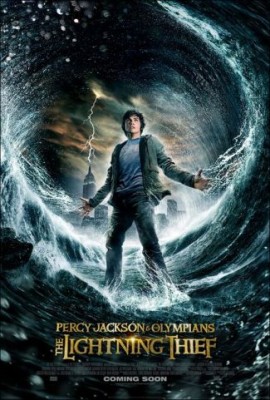 I’m not saying Columbus breaks any new ground in visual effects, but you can see the love he has for this material up on the screen. The lighting flushed with a nice golden hue, the sets are nicely realized and the CG work on some of his “creatures” like Pierce Brosnan’s Centaur looked a bit odd. But then I always think Centaur’s look odd.

This is a story probably will appeal to the same HP crowd. It’s an almost verbatim rip off. Instead of the Orphaned Kid who doesn’t know he’s a wizard, we have a picked on, alienated kid named Percy Jackson (Logan Lerman) who turns out to be the son of the God of the Seas – Poseidon (Kevin McKidd). Once Percy finds out who he is, of course he has to be trained, so instead of Hogwarts, we get “The Half-Blood Camp,” which is exactly what the name implies a camp where Children of the Gods come to train and learn how to become heroes. If that’s not enough he even gets two friends the “brainy” one Annabeth (Alexandra Daddario) and the “funny” one Grover (Brandon T. Jackson). I now know that any kid with Dyslexia and ADA is probably a Demi-God and I should treat them accordingly. 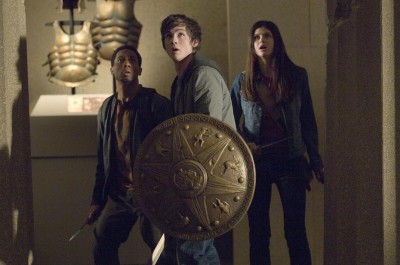 Columbus once again does a great job casting a bunch of “unknowns” in the lead kid roles while beefing up the Adult roles with funny cameos by stars, there are fun scenes with Uma Thurman playing Medusa and Rosario Dawson as Hades lover. The action sequences in this film are so pedestrian that it’s hard to feel connected to them but I cared enough about the story that it didn’t bother me as much as it normally would.

The training sequences had Percy going from Zero to Hero in a couple of days. No years of training and putting up with Snape to learn potions or silly wand movements here. Just hey Percy “You have power and natural instincts, use them…” And hey Percy, “You are my favorite student because you Disobeyed me.” Ah, ok? Annabeth is the daughter of the Greek Goddess of War, she kicks butt in the Camp but once out on their quest in the “real” world she turns into a scared little girl every time she’s in danger. Just once I would have liked to see her kick some butt.

At this point, I’m really sucked into this low grade HP rip off, but then Columbus has to go and add Apple Product placement into the film. Yes, once again the iPhone saves the day and from out of no-where they whip out a MacBook for research. It completely took me out of this movie; I’m so sick and tired of seeing Macs and Apple products in almost EVERY movie I watch! Jesus, GIVE IT A REST!!

I know this is a multi-book series but The Lightning Thief doesn’t set up any future films. This is one self-contained story with nothing left to make you go, wow, I want to know what happens next.  I have to admit I’m curious to see where this all goes. Yes, I realize I just contradicted myself. What can I say; I’m a sucker for serials even if the first one doesn’t make want to watch any future installments.  Columbus puts just enough into this that I’m on board for more, I already downloaded the book to my Kindle. This is what a quality book adaptation should do – stand on it’s own, while making you want to explore more.