Dante’s Inferno is an unusual direct-to-DVD release for two reasons: it’s only the second film tie-in to a videogame released the same day, and both adapt [very freely] Dante Alighieri’s epic poem of the same name. 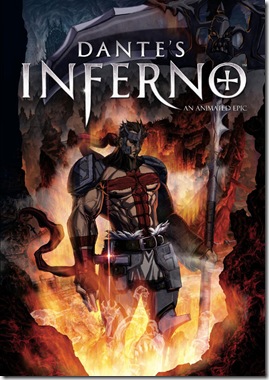 In the poem, Dante, more of a scholar than a fighter, finds his way into hell to save the life of Beatrice, a woman he’s loved from afar forever. He receives aid and guidance from the shade of the Roman poet Virgil. Obviously, as written, the poem wouldn’t make a particularly good video game.

For both the game and the DVD, Dante is beefed up into a knight heading off to the Crusades [historically inaccurate, but irrelevant for our purposes]. He and Beatrice have been in love forever and seal their love before he heads off to war – which is where our saga begins.

After wandering through a darkly unfamiliar wood, Dante finally arrives at his home to discover everyone dead and his beloved Beatrice being spirited away to Hell itself. He sears to free her – even though it may be his sins that sent her there [hint: don’t believe priests who absolve you of your sins in advance!]. From there, with Virgil’s help he finds his way into Hell and descends through its nine circles: Limbo, Lust, Gluttony, Greed, Wrath, Heresy, Violence, Fraud and Treason.

Along the way, he meets condemned sinners ranging from the famous [Achilles, Cleopatra, Caiaphas – the high priest responsible for ordering Christ crucified, etc.] and not so famous [his mentor, Brunetto Latini among them]. He encounters mythological figures like King Midas, who judges the damned, and Cerberus, the three-headed dog who guards the entrance to one of the circles of Hell.

While making Dante a soldier and a love life may take away from the poem, Dante’s Inferno follows his journey though the nine circles of Hell – and his path to redemption in a manner that gives the film [and likely the video game] surprising depth. Of course, gamers will also love all the violence and blood – elements that take on an ironic quality in the movie.

Unlike Dead Space: Downfall, the first attempt at creating a complementary movie/backstory to a video game, Dante’s Inferno is – thanks to an excellent script by Jonathan Knight – smart, focused and good, old-fashioned, bloody [emphasis on the bloody] fun.