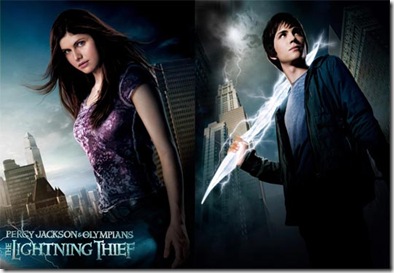 Christopher Columbus clearly learned a lesson from working on the first Harry Potter films – a film doesn’t need to be slavishly adapted from a book to be successful. The Lightning Thief may be almost two hours long, but it mostly zips right along. Not only are entire subplots from the book eliminated, but several characters have been cut, too.

Percy Jackson [Logan Lerman, 3:10 to Yuma] is a bit of a loser. He has dyslexia and attention deficit disorder – which make it difficult to concentrate in class, or read stuff on the chalkboard. He lives with his mom, Sally [Catherine Keener] and her husband, the underwhelming Gabe Uglioano [Joe Pantoliano]. When he’s attacked by a harpy on a field trip to a museum exhibit centered on the Greek gods, he learns he’s really the son of Poseidon, God of the Seas [Kevin McKidd].

It seems that someone has stolen Zeus’ [Sean Bean] master lightning bolt and Percy has been set up to look like the thief. If he doesn’t return the bolt by midnight on the summer solstice, the gods will go to war – which will probably destroy humanity in the process.

Fortunately, Percy’s history teacher, Mr. Brunner [Pierce Brosnan], turns out to be Chiron, the centaur of legend who trained heroes/demigods in ancient times – and Percy’s best friend, Grover [Brandon T. Jackson], is actually a satyr and his personal protector. The two of them whisk him and his mom off to Camp Half Blood – a training ground and home for the children of the gods.

When a minotaur grabs his mother at the camp’s entrance [she can’t enter since she’s a mortal], Percy dispatches it but his mother is gone. Chiron and Grover take Percy into the camp, where he meets Annabeth, [Alexandra Daddario] daughter of Athena during a spirited war game version of Capture the Flag. This is also when he makes the discovery that water gives him power.

If it sounds a bit like Harry Potter – only with gods instead of wizards – that might be because the quest is a key part in most coming of age stories. In Percy’s case, his quest is to release his mother from Hades [the place] and the clutches of Hades [Steve Coogan], the god. He hopes that Hades will understand that he did didn’t steal the bolt and let them go. His innocence amuses Grover and Annabeth, who choose to accompany him on his quest.

Considering how solid the film is, I had to be glad that Columbus hadn’t included subplots involving a daughter of Ares and the original version of who stole Zeus’ lightning bolt [among other things]. As it is, Percy has his hands full with Medusa [a gloriously sexy Uma Thurman], a hydra, a hotel that entices its visitors to stay forever, and the husband and wife team of Persephone [a gloriously sexy Rosario Dawson] and Hades. Add to that a potential romance between Percy and Annabeth [“I have strong feelings for you – I just haven’t decided if they’re positive or negative”], and there’s more than enough material to fill two hours.

The Lightning Thief is, for this sort of thing, a sleek fantasy that is propelled by both character and plot. Columbus keeps things moving and his cast is pretty gung ho. The effects range from pretty spectacular to a bit soggy [considering that water is Percy’s best weapon, I just had to say that]. Although there are changes in tone [earnestness to sly humor, to near campy sexiness], they actually feel true to the original while giving the film an extra layer of depth.

Overall, The Lightning Thief may have one of the more unwieldy titles, but it’s a fun outsider-finds-a-place-to-fit-in film. The series has a lot of potential and this makes for a pretty good start.