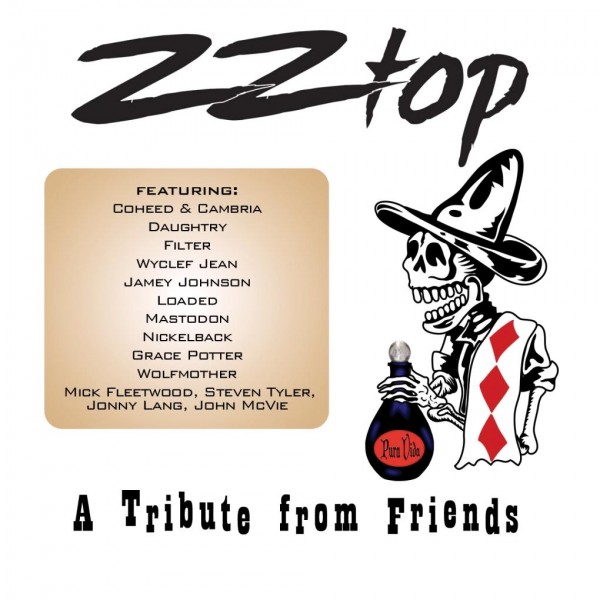 For those that are fans of ZZ Top’s music from past material to current material, there’s a tribute album to the famous southern rock/blues band that will be released next month by Show Dog-Universal Music. Here’s the Press Release with additional details:

The music and legacy of ZZ TOP – “That Little ol’ Band from Texas,” that has been part of the world’s musical landscape for over 40 years – will be celebrated with the October 11th release of A TRIBUTE FROM FRIENDS.

The album, to be released by Show Dog-Universal Music, features 11 classic ZZ Top songs interpreted by top-flight artists working in a broad range of musical genres. All of the album’s tracks have been newly recorded, specifically for the project. These include Filter’s performance of “Gimme All Your Lovin’,” Grace Potter & The Nocturnals’ take on “Tush,” as well as Wyclef Jean’s “Rough Boy,” “Legs” from Nickelback and Wolfmother’s interpretation of “Cheap Sunglasses.”

The album kicks off with “Sharp Dressed Man,” from The M.O.B., Mick Fleetwood’s ad hoc group that includes fellow Fleetwood Mac founder John McVie as well as Aerosmith’s Steven Tyler and guitar great Jonny Lang. Fleetwood commented, “We’re delighted to honor ZZ Top this way. Their legacy, like that of the original Fleetwood Mac, is steeped in the blues we all love so much. I know that Steven and Jonny feel as strongly about their legacy as John and I do.”

After Billy F Gibbons, Dusty Hill and Frank Beard, the original–and continuing– members of ZZ Top were informed that A Tribute From Friends was in the offing, they issued the following statement:

“When we were told there was going to be a ZZ Top tribute album a while ago and logically asked, ‘Who are we paying tribute to?’ Then we found out that a bunch of great artists were paying tribute to us and we were in disbelief. For the past forty or so years, all we’ve done is get out there and crank it and try to have a good time while doing so. To a great extent, we’ve succeeded since we’re still having a good time so that would be reward enough for ‘the same three guys playing the same three chords.’ Now comes A Tribute From Friends and we’re so delighted that our music resonates with these great musicians whom we so admire.”

A Tribute From Friends also includes “Waitin’ for the Bus/Jesus Just Left Chicago” by Daughtry, “Got Me Under Pressure” from Duff McKagan’s LOADED and Mastodon’s version of “Just Got Paid.” Coheed & Cambria contributed the anthemic “Beer Drinkers and Hell Raisers” while country superstar Jamey Johnson’s track is the seminal “La Grange.” Of their invitation to be a part of the album, lead singer Chris Daughtry said, “We were completely honored! A classic great band with amazing songs? We’re in!” And of ZZ Top’s music, “It’s classic! Simple chord progressions, great riffs with hooky choruses…very inspiring to a band like us.”

The co-executive producer of A Tribute From Friends is Carl Stubner, ZZ Top’s manager, who noted, “A Tribute From Friends underscores the legacy of ZZ Top in the most musical way possible and illustrates just how important Billy, Dusty and Frank have been to successive generations. It was a privilege to work with the pantheon of brilliant artists who contributed their efforts and so much love to this project.”

Since Billy, Dusty and Frank founded ZZ TOP on the last day of 1969, the band has been responsible for the worldwide sale of over 50 million records highlighted by many of the very same songs heard on A Tribute From Friends as well many others including “Sharp Dressed Man,” “Pearl Necklace,” “I’m Bad, I’m Nationwide,” “Tube Snake Boogie” and a score of smash hit albums that include the RIAA Diamond Award winning (10 million sold) Eliminator as well as gold and platinum winners Afterburner, Fandango!, Deguello, Recycler, Antenna, El Loco, Tejas, Tres Hombres plus compilation sets. Their hit repertoire, iconic and award-winning videos and massive touring schedule has made them a favorite with audiences throughout the world and beyond – they previewed a track from their forthcoming album aboard the Soyuz space vehicle. They are recipients of the Texas Cultural Trust’s 2011 Texas Medal of the Art and had previously been named “Official Texas Heroes” by the state’s House of Representatives. They were inducted into the Rock and Roll Hall of Fame by Keith Richards of the Rolling Stones in 2004 who cited the band’s remarkable consistency and longevity and, first and foremost, the fact that ZZ Top is “steeped in the blues,” calling them “the heartbeat of the whole country and the heartbeat of rock ‘n’ roll.”

A TRIBUTE FROM FRIENDS – TRACK LISTING

The song “Waitin For The Bus/Jesus Just Left Chicago” performed by Daughtry can be found on SoundCloud at:
http://soundcloud.com/rca-music-group/10-waitin-for-the-bus_jesus

ZZ Top: A Tribute From Friends will be released on October 11th, 2011 and can be found on the Show Dog-Universal Music label.

ZZ Top can be found on the web at:
http://www.zztop.com/
http://www.facebook.com/ZZTop