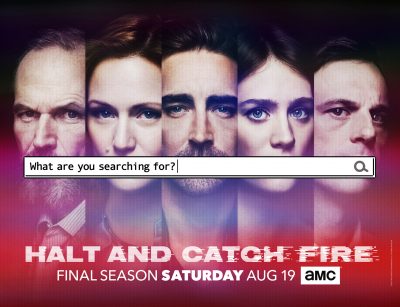 SEASON FOUR DEBUTS WITH A TWO-HOUR PREMIERE ON SATURDAY, AUGUST 19THAT 9:00PM ET/PT

NEW YORK, NY- July 27, 2017- AMC today released the key art for the fourth and final season of “Halt and Catch Fire,” which will debut with a two-hour premiere onAugust 19th at 9:00pm ET/PT. “Halt and Catch Fire,” created by executive producers and co-showrunners Christopher Cantwell and Christopher C. Rogers, chronicles the tech industry and the birth of the Internet in the 1980s and early 1990s.

The final season of the series will see our cast of characters navigating the early days of the Internet and web browsers, pondering their destinies both personally and professionally, while the competitive nature of the tech world continues to complicate and affect their relationships.