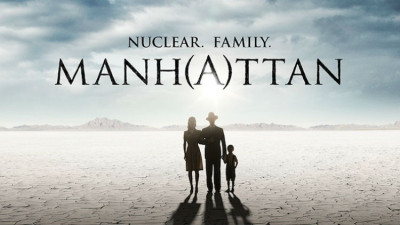 In preparation for a possible upcoming set visit I went to the trusty iTunes and purchased WGN America’s latest scripted series Manhattan. Hey, contrary to popular belief I will occasionally do my homework! I’m blown away by how much I’m digging it.  Season two was recently announced and going into production next month.  The buzz is starting in a big way as Manhattan just won the 2015 SXSW Jury Award for Excellence in Title Design. I highly recommend picking this show up on your digital service of choice. Check out the sequence below.

This award comes on the heels of another industry accolade acquired by the show’s below-the-line crew. Director of Photography, John Lindley, previously won the American Society of Cinematographers’ Outstanding Achievement Award in a Television Movie, Miniseries, or Pilot for his work on the premiere episode of the series, “You Always Hurt the One You Love.”

Created and written by Sam Shaw and directed by Emmy® Award-winning director Thomas Schlamme, “Manhattan” is set against the backdrop of the greatest race against time in the history of science — the mission to build the world’s first atomic bomb. The series follows the brilliant but flawed scientists and their families in Los Alamos as they attempt to coexist in a world where secrets and lies infiltrate every aspect of their lives.

“Manhattan” is executive produced by Sam Shaw, Thomas Schlamme, David Ellison, Dana Goldberg, Marcy Ross and Dustin Thomason. The series is filmed on location in New Mexico.  Follow “Manhattan” on Twitter @ManhattanWGNA. “Like” the series on Facebook at www.facebook.com/ManhattanWGNA, and join the discussion with #manhattanwgna and #Fanhattans. See photos on Instagram by following @ManhattanWGNA and videos at www.youtube.com/ManhattanWGNA.