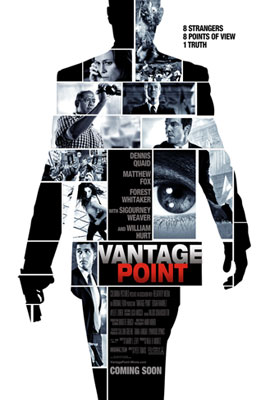 When the President of the United States [William Hurt] appears in a Spanish town to announce the signing of an international treaty to fight terrorism, he is shot. Moments later, there is an explosion that kills many and adds to the overall confusion. Now the real fun begins.

One by one, we follow seven different points-of-view from twenty-three minutes earlier. Among them are Thomas Barnes [Dennis Quaid], a Secret Service agent who is just back on active duty after taking a bullet for the President a year earlier]; Howard Lewis [Forest Whitaker], an American tourist who has been recording the event on a camcorder; Enrique [Eduardo Noriega], a cop who works for the mayor, and four others. 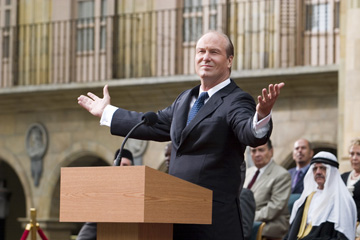 While it’s not much of a spoiler to note that the assassin actually kills a double [that’s given away in the trailer], it might be to detail what happens to the real President – though by the time you sit through all seven plot arcs, you might wish I had.

The problem is that each POV does reveal a little more information, but the repetition of many events that many times tends to play havoc with one’s patience [people were walking out of the screening I attended]. Even Kurosawa only used four points-of-view [plus the camera – which is not the case here]. 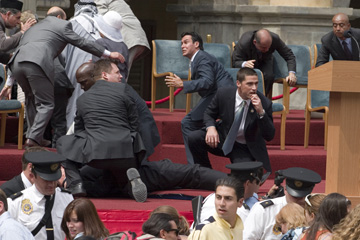 Another problem is the way certain characters are connected in unexpected [and frequently implausible] ways. This makes the characters who float through all the arcs behave in arbitrary and often imbecilic ways [see: the mother and her young daughter]. Not only that, when the whole plot is finally revealed, there are characters whose behavior is never really explained. In the case of one particular character [who flees in a stolen police car], this is especially pathetic.

Somehow, though, the cast manages to perform well enough that they aren’t the embarrassment here. Matthew Fox [Barnes’ partner, Kent Taylor], Edgar Ramirez [Javier] and Zoe Saldana [GNN reporter Angie Jones] all match Quaid, Whitaker and Noriega in the intensity of their performances. Sigourney Weaver, as the director of the GNN mobile unit, is completely wasted.

The problem, though, is that the script [by first-timer Barry Levy] is simply too much of the same thing – to the point where I [and a good part of the audience] lost interest before everything came together. The only difference between the other and me is that I never walk out of a movie once I’ve paid cash for it and stayed through the incredibly convoluted and messy ending.

Vantage Point is not worth anyone’s ten or twelve bucks.