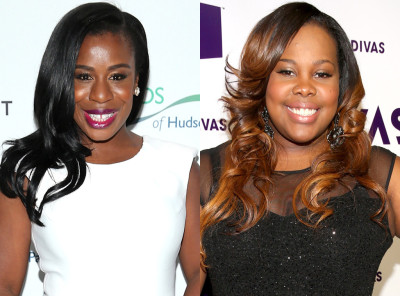 Uzo Aduba (Orange Is The New Black) will play Glinda, and Amber Riley (Glee) will be Addaperle. For details, follow the jump.

“We are so happy to welcome two actors we’ve admired and wanted so much to work with,” said executive producers Craig Zadan and Neil Meron. “We look forward to showcasing the amazing musical talents of Amber and we are eager to introduce Uzo’s remarkable singing voice for those who know her solely as an extraordinary dramatic actress.”

Aduba, who once again is nominated for an Emmy this year, is best known for her role as Suzanne “Crazy Eyes” Warren on the Netflix series “Orange Is the New Black.” She will play Glinda, the Good Witch of the South, who finally reveals the secret of the silver slippers to Dorothy and points her way home.

Before starring on television, Aduba made her Broadway debut in “Coram Boy” in 2007 followed by the hit musical revival of “Godspell” in 2011. She discovered her talent for singing at a very early age and became a classical music major at the Boston University School of Fine Arts.

Aduba was nominated for a Helen Hayes Award for best supporting actress in a play for her work in the Kennedy Center/Olney Theater production of “Translations of Xhosa.” Other theater credits include “Dessa Rose” at the New Repertory Theatre, “Turnado: Rumble for the Ring” at the Papermill Playhouse and “Abyssinia” at the Goodspeed Theatre.

Riley will play Addaperle, the Good Witch of the North who isn’t the best at magic but she does try. She is a sister of Glinda, Evillene and Evvamene, the other three witches of Oz. She points Dorothy to the Yellow Brick Road and her journey to Emerald City.

Riley, who has played Mercedes Jones on “Glee” for six seasons and was a significant musical force on the series, won a SAG Award in 2010 for outstanding performance by an ensemble in a comedy series, and was nominated three other times in the same category.

In 2013, Riley won the 17th season of ABC’s “Dancing With the Stars” as she was partnered with five-time champion Derek Hough.

David Alan Grier will play the Cowardly Lion, who asks Dorothy if he can join her in her journey down the Yellow Brick Road to ask the Wiz for some courage, which he is severely lacking.

Shanice Williams, a 19-year-old New Jersey native who has been raised and trained in musical theater, is the new Dorothy.

Stephanie Mills was previously announced to portray Auntie Em in “The Wiz Live!” Mills is best known to many for playing Dorothy in the original Broadway production of “The Wiz.”