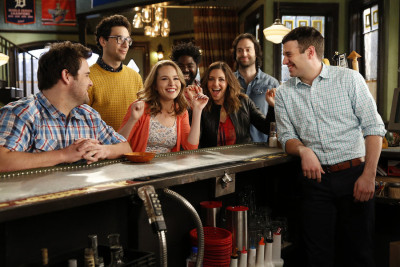 Undateable (NBC, Tuesdays, 9/8) is going where few shows have gone – live. Tomorrow, the cast of Undateable, along with a host of guest stars, will perform live twice. Viewers of both coasts (and everywhere in between) will be able to enjoy different versions as happens when there are no re-takes, no edits and no chances to rescue goofs.

Guests joining the fun include (but are not limited to): Zach Braff, Neil Flynn, Christa Miller, and Victoria Justice. All that plus a Grammy-nominated musical guest that remains nameless, for now. For more, follow the jump.

THE STARS ARE ALIGNED AND SCRUBBING IN FOR A SPECIAL LIVE EPISODE OF ‘UNDATEABLE’ TUESDAY, MAY 5 AT 9 P.M. ON NBC

On Tuesday, May 5 at 9 p.m. ET/PT on NBC, a cadre of comedic stars, as well as one superstar musician, will unite on the Warner Bros. Studios lot to film a special live one-hour episode —twice! — of the hit comedy series from Bill Lawrence and Adam Sztykiel.

Tune in for the live episode Tuesday, May 5 on NBC, which will be performed twice so both the East and West Coast audiences will see a different live version, each beginning at 9 p.m.

Who knows what could go down? (Seriously, we have an idea but with this cast of characters, anything could happen.)

To join the conversation, feel free to use the #UndateableLive hashtag.

Photo by Greg Gayne/Courtesy of NBC