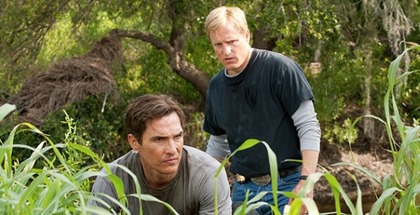 Can you betray someone by not doing something? Is Rust aware he’s part of a story? True Detective (HBO, Sundays, 9/8C) became much more than just another murder mystery right from its premiere. The series has called into question various philosophies; the nature of the universe; the concept of fate, and whether a person’s character can change. In tonight’s episode, Haunted Houses, things simultaneously begin to come together and fall apart.

Read a review of Haunted Houses and check out a sneak peek of a key moment (warning: F-Bomb alert) after the jump.

In episode five of True Detective, The Secret Fate of All Life, Rust Cohle (Matthew McConaughey) spoke of a flat circle that would be how our three-dimensional space-time continuum might be viewed by a being perceiving it from a fourth dimension – alluding to our eternity being a single story that would repeat over and over forever. One might think that he had become aware of being part of a story, himself.

In Haunted Houses, Rust’s actions bring his sanity into question, while Marty (Woody Harrelson) behaves in a self-destructive manner that we have seen before (only the name has been changed to protect the vulnerable).

Detectives Papania (Tory Kittles) and Gilbough (Michael Potts) overplay their hands – making their real investigation clear – and possibly positioning themselves as stooges in a kind of murderous comedy. Their obvious target eventually alienates them to Marty, and bringing Marty’s ex, Maggie (Michelle Monaghan) in to ask her about Rust gives us to the opportunity learn more about her but makes them look even less believable.

Rust’s insistence on following leads on a case that everyone else considers closed brings down the wrath of his boss and, pushes Marty away once and for all. Maggie’s actions in the episode are less nobly pursued but add to idea that this is a story will occur over and over again.

The way Rust continues to butt heads with accepted belief and accepted authority gives him an odd nobility, while Marty’s actions in the teaser finally make him seem fully human (he does something he feels that he needs to do, but having done it, he is sickened by it/himself).

Even as Rust’s personal investigation gives him cause to believe he’s on the right track – and just one break away from finding the scarred man (who has taken on the iconic stature of The Fugitive’s one-armed man) at whom everything seems to be pointing – he’s shut down and now, in the present, being set up as the missing killer.

Cary Joji Fukunaga’s direction keeps things moving along with few bursts of action but a feeling of some kind of volvanic eruption just bubbling below the surface. He draws appropriate performances from his cast every time – whether that character goes big (as with Reverend Tuttle) or smaller (Detectives Pâpania and Gilbough); intense (Rust and Marty) or lighter (Beth, whom you will meet tonight).

The result is television that asks its viewers to think and feel. True Detective has two episodes left until we find out just what actually happened – and see if justice is served. There is nothing else on TV that I’d rather be watching right now.