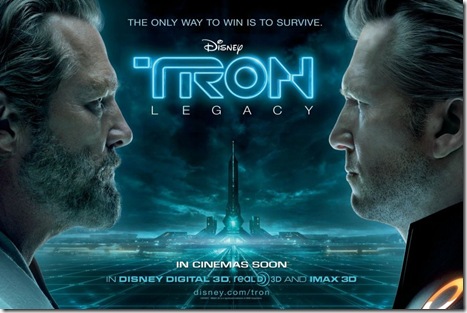 The plot of TRON was simple: a computer whiz gets sucked into a world inside his computer, where he faces deadly challenges while attempting to thwart a rogue program from taking over. As it was for the father, so it is for the son.

Sam Flynn [Garrett Hedlund] hasn’t heard from his father, Kevin, [Jeff Bridges] since the long ago night, when he was seven, that his father went to work and never returned – this after telling Sam that he had discovered something miraculous in the computer world he had visited.

Now twenty-seven, Sam has never really exercised his rights as majority stockholder in Encom, the company his father headed, instead, retreating to a very male cave of an apartment with Spartan furnishings – except for his motorcycle, a cluster of sofas and big-screen TV – except for his forays into Encom to pull elaborately staged pranks on the anniversary of his father’s disappearance.

When father’s business partner, Alan Bradley [Bruce Boxleitner], informs him that he has received a page from the number at his father’s old arcade – a number which hasn’t been in operation twenty-five years – Sam visits the arcade and discovers a secret office hidden behind an entrance fronted by a vintage TRON video game.

Before you can say Kevin Flynn, Sam is whisked into the computer world his father named The Grid – where he faces deadly challenges; is reunited with his father, and has to stop a rogue program from expanding his conquest of The Grid into taking over our natural world. Along the way, he meets his father’s ‘apprentice,’ Quorra [Olivia Wilde, whom the 3-D camera adores] and Clu [also Jeff Bridges], who turns out to be the megalomaniacal rogue program.

The film actually opens with a twenty-minute 2-D sequence that fills in the blanks for the multitudes that haven’t seen TRON, while setting the scene for the now-grown Sam to find his way into The Grid. When Sam is whisked into the computer world, it’s like a darker version of Dorothy landing in Oz. Everything is different – though in this case, we’re entering a conquered world and thus The Grid is delineated in a palette of blues, greys, blacks and the occasional stark white.

All the tech from the first film is here – recognizers, lightcycles, laser-powered sailing vessels and so forth – but there’s more character development [even if it is much more rudimentary than the effects]. The disc that doubles as both weapon and shield – as well as being a memory receptacle for each program’s life events – is also put to good [and in one case, exceedingly original] use. 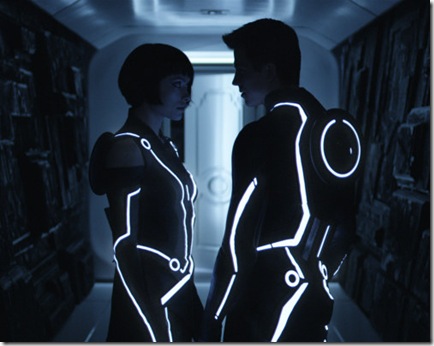 The upgraded vehicles are quite remarkable – especially the lightcycles. They are no longer constrained to traveling in straight lines and their light trails are one of the film’s best effects. A new addition, a kind of souped-up hot rod version of the lightcycle is also pretty spiffy.

Bridges is compelling as all three iterations of his character – thirty-five year-old Kevin, present-day Kevin and his Grid doppelganger, Clu – thanks to some clever manipulation of effects, editing and lighting [the opening is shot in sepias and browns that make the effects produced younger Kevin less glaring, and Clu, being a program, is expected to have something of a sheen, anyway]. If there’s a bit of The Dude in present-day Flynn, well, that procides some unexpected [though intended] humor.

Hedlund, who has more than a slight resemblance to the younger Bridges, brings the proper sense of loss and alienation to Sam and is believable through Sam’s change from resentful to caring. He also makes a convincing action hero.

Wilde is more than adequate as Quorra. She hides the key to a secret that relates back to Kevin’s miraculous discovery, but she’s also feisty in a very unprogram-like manner. And have I mentioned that the 3-D camera absolutely loves her?

Michael Sheen steals the film with an over-the-top performance as the flamboyant bar owner, Castor – the only link Sam has to a potentially helpful program called Zuse [think a mix of David Bowie and Joel Gray].

Boxleitner appears briefly as both Bradley and the original Tron. His charisma is palpable and his intensity as Bradley is enough of a believable provocation for setting Sam on his path that we buy him without question.

The script, by Lost scribes Edward Katsis and Adam Horowitz, is pretty bare bones in terms of events, at least. Effects, music and performances are what keeps the film from being a 3-D miss – and make no mistake, the 3-D makes The Grid a very real place while you’re in the theater.

Normally, you shouldn’t notice a film’s score, but since the Daft Punk soundtrack has been the source of much curiosity, it’s pretty hard not to listen for it. The duo have created a mix of electronic and orchestral that is propulsive and will likely stand up pretty well on its own – but it does what every core should do, it enhances the happenings on the screen, without being obvious [except when necessary, as in the bar sequence]. Pieces of the score rank as some of their best work.

TRON: Legacy is director Joseph Kosinski’s first feature and he definitely had a firm handle on what he wanted it to be. While the story might be simple, the fillips/fiddly bits that require effects and stunt work all function smoothly within the film’s framework. The pacing is fast enough to not bore, but deliberate enough for us to settle into its alien environment.

TRON: Legacy is TRON what Pixar’s Toy Story 3 is to its first short feature, The Adventures of Andre´ and Wally B – a quantum leap forward, technically. The simplicity of the tale, and the character arcs, are done well enough to be enjoyed by even those who never saw the original – and if there are echoes of other tales contained within, well, there are only so many plots. As a self-contained work, TRON: Legacy is worth seeing – possibly even more than once – on the big screen.