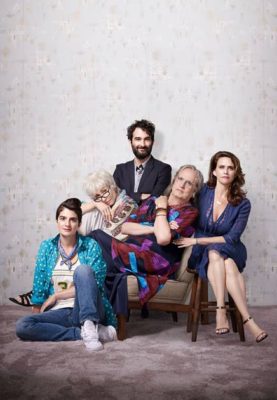 “As the quality of television rises to new heights, Transparent continues to stand out for its depth of character, compassionate storytelling and its infinite creative risk-taking,” said Joe Lewis, Head of Half Hour TV at Amazon Studios. “We’re grateful that customers have responded so enthusiastically to the Pfefferman family and we’re excited to bring them another chapter of their story.”

“Amazon’s explosive freedom and revolutionary thinking has given birth to this show,” said Soloway. “It’s so much more than TV to us, it’s our version of the most ambitious streaming art we can conjure. We’re having the time of our lives sharing season two for the awards season hoopla, and editing and finishing up season three for a fall release. This news of an order for season four is so so sweet. The Pfeffermans have many more stories to tell and we can’t wait to keep making them.”

Written, directed and executive produced by multi-award winner Soloway, Transparent is a half hour novelistic series that explores family, identity, sex, and love. The series stars Tambor as Maura. When she reintroduces herself to her family, everyone else’s secrets finally start to come out. This includes her ex-wife Shelly (played by Light), and their children—meandering Ali (played by Hoffmann), music producer Josh (played by Duplass), and sexually conflicted Sarah (played by Landecker). Each family member spins in a different direction as they figure out who they won’t become. The highly anticipated third season of Transparent is scheduled to premiere this fall on Prime Video in the US, UK, Austria, Germany and Japan.

In addition to Prime Video, the Prime membership includes unlimited Free Two-Day Shipping on millions of items across all categories, more than one million songs and thousands of playlists and stations with Prime Music, early access to select Lightning Deals all year long, free secure, unlimited photo storage in Amazon Cloud Drive with Prime Photos, access to borrow books with the Kindle Owners’ Lending Library, and more. To sign-up for Prime or to find out more visit: www.amazon.com/prime.