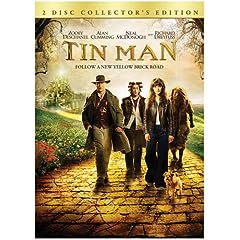 Tin Man is the Sci Fi Channel’s re-imagining of a classic work of fiction and its film adaptation. It’s darker, livelier and definitely entertaining, but it’s not your great-great grandparents’ Wizard of Oz.

L. Frank Baum‘s classic fantasy fable, The Wonderful Wizard of Oz, has been read by more children [and their parents] than most any other work of fiction. The 1939 film adaptation remains a classic with engrossing characters and effects that still thrill and chill as well as the day it was first released. So, why Tin Man? Because every classic needs to be hauled off the shelf and dusted every forty or fifty years.

In the case of The Wiz, that was not a Good Thing. In the case of Wicked [the novel – I haven’t seen the play], it was an Extremely Good Thing. So now we come to Tin Man – re-imagined by the guys who created the cult favorite TV series, The Pretender, Craig Van Sickle and Stephen Long Mitchell and directed by Nick Willing. The mini-series was produced by Robert Halmi Sr. and Robert Halmi Jr. [and despite having Executive Producer credits, neither Van Sickle nor Mitchell turn up in any behind-the-scenes Featurettes].

The story hits [as they state, repeatedly, in the features] all the beats of the original story, but they take it in a very different direction. In this version, DG [Zooey Deschanel] is a bored waitress and part-time student who feels like she just doesn’t fit in in Kansas. Her plans to see the world are interrupted by some men in black leather dusters and a big honkin’ tornado – into which her parents toss her – with cries of “Trust us!”

She wakes in a different, yet familiar world where she is immediately set upon and captured by short warriors dressed in leather, feathers and face paint. With the help of a man with a zipper on his head, she manages to flee – and we’re off to the races.

Without giving too much away to first-time viewers, there are reasons that DG finds The O.Z. familiar; a pretty nifty take on the Wicked Witch; a surprising Toto, and references to many Oz characters from the series of books [watch for a particularly cool cameo from Tik-Tok].

Though its tone is considerably darker than the movie, or the book [both of which had some pretty dark material in them to begin with], it does hew to the central theme of four characters who seek their futures by remembering their pasts. The whole “there’s no place like home” idea gets similarly important play [though the analog of the quote is a bit less than all that].

Overall, I found the writing to be inventive and emotionally true to the spirit of Baum’s classic, and found that the re-invented characters were intriguing and fun to get to know. There’s also a very cool connection between DG and the original book that’s pretty much inspired.

Nick Willing pushes the story along with a sure hand. He dextrously balances all the characters and their detailed backstories with a deft touch – and never let’s things slow to the point where they’d become boring. Judging from the number of effects shots [apparently about 1500], he’s very knowledgeable in how to shot for them.

Speaking of the effects, once you’ve seen how much went into them, you will realize how well they were integrated into the story. It’s always wonderful when effects serve the story rather than call attention to themselves. The effects, set design and costume design, work together to give Tin Man a rich, very truthful atmosphere. This is a world you can believe in [even if you might not particularly want to live there – at first].

I haven’t even touched on the Great and Terrible Wizard of Oz, or the flying monkey/bat things, or any of a number of Oz analogs that give Tin Man the ability to thrill – and chill – as well as the original. Nor have I mentioned the reason that DG had to wind up in The O.Z. What you need to know is that this six-hour Sci-Fi mini-series is inventive, honors the original, and is more fun than a barrel of… well, you know!