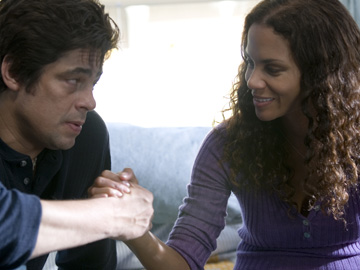 When Brian Burke [David Duchovny] goes off to the store to pick up some ice cream, he never comes back. His death, while trying to help a woman who was being beaten – in public – by her husband, tears apart the lives of his wife, Audrey [Halle Berry] and children, ten-year old Harper [Alexis Llewellyn] and six-year old Dory [Micah Berry]. In desperation, Audrey reaches out to Brian’s best friend, Jerry Sunborne [Benicio Del Toro], a heroin addict.

As plots go, this is one of the simplest. That’s because the film is not about plot – it’s about love, loss and recovery. Brian and Audrey have an almost perfect marriage [revealed through flashbacks] – the only glitch in the system is Brian’s unswerving loyalty to his best friend since the second grade, Jerry. Audrey simply cannot understand why Brian cares so much about this man who has almost literally dropped off the face of society, though it’s that same capacity for love and loyalty that makes their marriage so good.

By having her brother Neal [Omar Benson Miller] bring Jerry to the funeral, Audrey sets in motion events that will give both of them back their lives. Audrey invites Jerry to live in the Burke garage [not as bad as it sounds – the space has been turned into a small apartment with its own bathroom] and between them they begin to face their grief and loss. 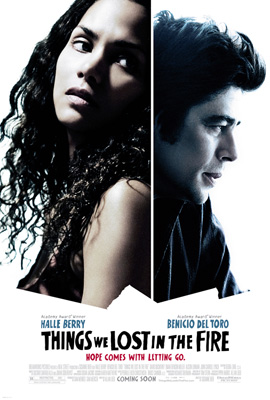 Berry, especially, has a meaty role in Audrey. She gets to run through all the stages of grief, while Del Toro’s Jerry deals with trying to shake his habit. It’s only through his willingness to fight that he begins to see what Brian saw in Audrey [whom he probably has never met before the funeral] – and it’s Jerry’s gentleness and gift for dealing with her kids that begins to bring Audrey back to life – though she fights it every step of the why, frequently questioning why it should be Jerry who’s alive and not Brian.

Films that are about character over almost everything else require a deliberate pace. You can’t blaze through them because you can’t get to know a person over the course of two hours of quick cuts and explosions. No, the trick is to bring to light aspects of each character carefully and naturally – but not in a way that puts your audience to sleep.

Danish director Susan Bier rightly keeps the film’s pacing to something just about a crawl, but reveals shadings of her characters in such a way that we don’t ever feel that the film is dragging. One key is the way she moves naturally from one character to another – the introduction of Brian’s jogging partner, Howard [John Carroll Lynch] leads to Jerry trying to get back into shape; Jerry’s playing basketball with Harper leads to Audrey’s revelation that she thinks it should have been him who died and not Bryan.

When Jerry persuades Dory to completely dip his head in the swimming, Audrey may be pissed that he did something her husband could not – and get up in Jerry’s face about it – you can see that there’s something besides just anger behind her eyes. Jerry’s Narcotics anonymous meetings lead his finding other reasons than Audrey and the kids to try to stay clean. 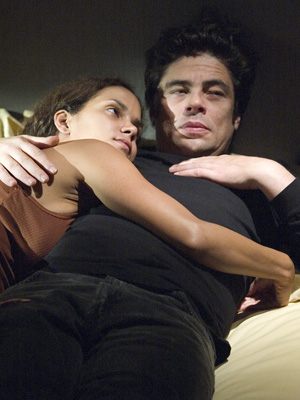 It’s a network of actions that lead to the eventual realization by both Audrey and Jerry that their individual pains can be overcome by simply letting others into their lives. It’s not the most dramatic of situations, but it’s one that is completely true and it’s arrived at through a kind of symbiosis between the two that lasts until they are ready to strike out on their own again.

Things We Lost in the Fire looks at both situations [Audrey’s and Jerry’s] though the lens of addiction. Jerry’s fight with his addiction is no less important than Audrey’s recovery from her loss. The similarity of their situations is what ultimately brings home the importance of their need for help.

Things We Lost in the Fire is a stunning film that does more than just position Halle Berry and Benicio Del Toro in the Oscar® race. It’s an affirmation that small things can prevent life from being a bitch. It’s a film that simultaneously extols the virtues of individuality and the need for family and friends. In short, it’s a small miracle.