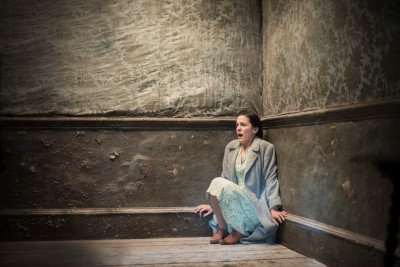 The Woman in Black 2: Angel of Death is set forty years after the first film – when children were sent to the country to escape the dangers of the blitz in WWII London. Other than the house and the Woman in Black (though we never really see her clearly enough to even establish that) there is no link to the first film. Even tales of the house’s dangers have faded into the past.

This was not a good idea.

In the London of 1941, a group of children are put on a train to get them out of the dangers of the blitz – one of the group, Edward (Oaklee Pendergast), was the sole survivor when his home was hit by a bomb the night before they were to leave the city. The group of about a dozen kids are overseen by two teachers, Jean Hogg (Helen McCrory) and Eve Parkins (Phoebe Fox); the former a married woman whose husband is a brigadier in armed forces, the latter a young single woman with a secret.

On the train, Eve meets dashing pilot Harry Burnstow (Jeremy Irvine), who is assigned to an airfield near their own destination. Harry’s story is poignant – he is the only survivor of a crash at sea. 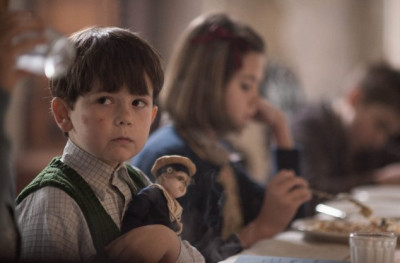 Once more or less settled into their new home, Eve makes appoint of telling two boys – James (Pip Pearce) and Tom (Jude Wright) – to befriend Edward, who hasn’t spoken a word since his parents were killed. Tom takes this to be an opportunity to bully the poor kid and, during a hastily improvised game of hide-and-seek, locks him in an upstairs room that will be familiar to anyone who saw the first movie.

The Woman In Black benefitted from a couple of things that are lacking here – a decent script and a cast that featured Daniel Radcliffe. The cast of unknowns undoubtedly kept costs down and shooting for a PG-13 rating had to help in that regard, too.

Like the original, Angel of Death relies on performances by fresh faces and atmosphere – foggy days, creaks, wheezes, percussive effects and the score – to create the opportunity for jump moments and general creepiness.

Angel of Death’s biggest problem is that it tries to do too much – between Eve’s story, Edward’s story, Harry’s story and shoehorning in the origin of the Woman In Black, there’s just too much going on for any one thing to be really effective. Add to that the fact that while the film’s sound design is pretty effective, the music cues essentially telegraph all but two meant-to-be-scary moments and the result – despite some very good performances – is a very average movie that should have been much, much better.