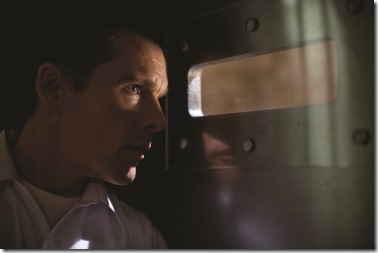 The Purge is a fast-paced, occasionally thought-provoking bit of microbudget mayhem that postulates an America that is nearly unemployment and crime-free – the latter through the annual event that gives the movie its name: Purge Night – twelve hours during which any crime, up to and including murder, is legal.

The Purge opens with various screens of horrific Purge Night violence juxtaposed with James Sandin (Ethan Hawke) driving home while talking with someone at his office – he’s just been named top seller of security systems for his company. When he gets home, we meet his family – wife Mary (Lena Headey), teen daughter Zoey (Adelaide Kane) and tween son Charlie (Max Burkholder).

Zoey has an older boyfriend, Henry (Tony Oller), that she’s been forbidden to see (but does, anyway); Charlie likes to hide in a secret place he’s found in his closet and play with a creepy remote controlled toy he built, and Mary seems a bit Stepfordish – but not as much as some of the Sandins’ neighbors.

As the family prepares to lock down their palatial home with the top of the line security system purchased from the company where James works, Zoey’s boyfriend sneaks back into the house. Charlie tries to get an explanation as to why Purge Night is so necessary, and James is making sure the family arsenal is ready – just in case.

After the lockdown, though, Charlie sees an injured man (Edwin Hodge) begging for help and disarms the security system to let him in. Unfortunately for the Sandins, the pack of masked Purgers who were hunting him soon appear and promise to take down their armored doors and windows and kill everyone inside unless they turn their victim over. James is okay with that, but Mary and Charlie are not.

The hunters refer to their prey as scum and filth, when he’s just a down on his luck ex-soldier (we see dogtags at one point).The hunters, on the other hand, are well dressed preppies behind their creepy masks. Their comments about their prey echo soundbites from the videos we saw earlier where protesters against Purge Night referred to it as the sanctioning of killing the poor and homeless. It’s that thread of social commentary – juxtaposed with the differences of opinion between members of the Sandin family that keep The Purge from being just another home invasion movie.

In point of fact, The Purge echoes many better films, like Straw Dogs, A Clockwork Orange, Funny Games and, a bit weirdly, Shane. Writer/director James DeMonaco does a pretty decent job of setting the stage, building suspense and giving us little jump moments on his way to the big blowout battle in the Sandins’ home.

The cast is pretty good – Hawke and Headey are old hands at this and are ably supported by Kane and Burkholder as the Sandin family. The hunters are cyphers – except for their leader (Rhys Wakefield, credited as Polite Leader), who is a grotesquery of affected politeness and over the top righteous indignation (whoever next tackles Batman, here’s your Joker!).

The Purge moves like a snowball that starts rolling downhill – slowly picking up mass and speed; hitting a few bumps that make it jump before it eventually destroys everything in its path. We get to know the Sandins a bit, then stuff begins to happen and – once things begin to move – we are drawn in. It doesn’t matter if the movie resonates with us on an intellectual level, because it’s constructed so well that we go for the ride almost in spite of ourselves. It’s a very slick bit of technical filmmaking.

Unfortunately, the movie’s satirical bite gets lost about halfway through and only returns in its (appropriately enough) dying moments. Even so, it does its job with enough of panache that even though I wouldn’t necessarily have paid to see it, I’m not sorry I did see it. It’s certainly much better than it had any right to be.