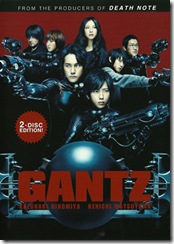 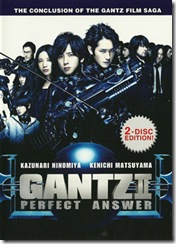 The Gantz Saga is a two movie adaptation of the popular manga. At first, it seems like a straightforward superhero vs. aliens tale – albeit with an odd origin – but as the story progresses, it begins to ask questions and shift from one perspective to another.

Gantz opens with two old friends, Kei [Kazunari Ninomiya] and Kato [Ken’ici Matsuyama] encountering each other in a subway station after many years. A child falls onto the tracks and Kato saves it. Then, with the train almost upon him, Kato accidentally pulls Kei onto the tracks as the train arrives and… they find themselves standing in the living room of a white apartment with a number of other equally surprised people – all of whom were also snatched from the jaws of impending death. And a huge, metallic dark grey ball. Then a naked, wet young woman, Kishimoto [Natsuna], appears.

Kato offers her his coat, but soon after, the ball opens and metallic briefcases are revealed – each labeled with the name of someone in the room. She goes into the bathroom and changes into the suit – an alien looking thing that reminds of superhero costumes.

The ball is Gantz, and it sends them all on a mission to kill an ‘onion alien.’ After they succeed in their mission – not without with some gruesome fatalities – they are returned to the white apartment, where they are graded on their performances. They are informed that if they reach 100 points, they can either have their memory erased and return to their place in the world, permanently, or they can ‘resurrect someone from memory.’

Then they are returned to their lives as if nothing had happened.

Over the rest of the first movie, the core characters learn more about the ways to use their suits and go on more missions.

Kei practices using the suit and becomes a bit too cocky, though he remains a bit of a nerd in his regular life. Kato works to support himself and his young brother, Ayumu [Kensuke Chisaka]. Kishimoto connects with Kei, as friends, in hopes of finding Kato – to whom she is drawn because she was impressed with his kindness in the apartment.

On their final mission, things happen that make Kei resolve to earn enough points to resurrect everyone who has died in the service of Gantz, and something one of the aliens says forces us to totally reconceptualize the story.

Gantz: Perfect Answer opens with a slightly sinister fellow with a Van Dyke bear watching Kato before losing him in the crowd. He has a file filled with photos and information of members of the Gantz team – including some we’ve never seen before.

Now the story becomes something of a chess match – we see more aliens and the battles are much more intense – the aliens now claiming that they are seeking revenge. A character we saw die seems to have been resurrected before a member of the Gantz team has earned enough points to bring him back.

The Gantz Saga is, between the two movies, about four and a half hours long., though it never seems like it because of the action and the mysteries being developed. It also helps that many of the human characters are quite engaging.

From the alien’s statement at the end of Gantz, we have become aware that the story isn’t just a fast-paced science fiction action movie. It’s about whether there are such things as good and evil, whether violence without reason is ever justified [no matter who might be the target]. Even the action motivated by love – of family, of a mate, of friends – becomes a subject for debate through the actions and counteractions of the humans and aliens in Gantz.

There are several good performances here. Ninomiya is especially good as Kei – his native shy intelligence and the ease with which he becomes cocky, even arrogant, as he learns to use his suit, are believable, as is his reverting to his shyer self when not actively engaged in missions. Matsuyama gives several different aspects of Kato an authentic feel – even when he plays more Kato’s negative side.

Yuriko Yoshitaka is fine as Tae, the shy would be manga creator who is in university with Kei – although the character is called to displayed unexpected courage and tenacity in Perfect Answer’s climactic final battles, she remains completely believable.

Director Shinsuke Sato does a great job of setting up situations and giving us what we need to begin to feel empathy for his characters. The fight sequences are generally very good – with a few reaching epic proportions. At times, though, the story seems forced – no doubt the result of distilling a long-running manga into two movies.

The special effects are pretty good. There’s a sequence with a giant statue that comes to life that reminds of Ray Harryhausen in the best possible way. Gantz and the suits are elegantly designed and feel genuinely alien, or at least sufficiently advanced that they don’t really echo anything we’ve seen before.

Overall, The Gantz Saga is a fun ride that goes to interesting places, asks a few questions and blows some stuff up. It’s great fun – if not exactly great cinema.

Features: Gantz: Japanese Trailers; Interview with Shinsuke Sato; New People Presents [not exactly a trailer, but rather an almost stream of consciousness glimpse of projects produced by New People.