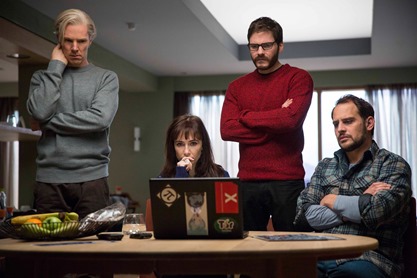 Bill Condon’s The Fifth Estate endeavors to tell us the story of WikiLeaks while painting a picture of the men behind its success and going behind the scenes of the website’s scoops. He gets amazing performances from Benedict Cumberbatch, as Julian Assange, and Daniel Brühl, as Daniel Berg – the visionary and the grounding factor of the story. Unfortunately, in trying to do too much, he has produced a film that doesn’t quite match its ambitions.

This is a story about a website that brought down a billion dollar bank; exposed Kenyan death squads and, finally, uploaded hundreds of thousands of confidential U.S. government documents and communications, throwing the entire world into an uproar.

While Cumberbatch manages to give Assange some leeway – he fluctuates between hard-nosed idealist (‘WikiLeaks does not edit; editing shows bias’), morally ambiguous (like Heath Ledger’s Joker, every time he talks about his past – especially about how his hair turned white – we get a different story) and supremely egocentric (describing the man who put the most work into the website’s security and development as ‘an employee’). Oddly, I found myself thinking about the Biblical reference that the Devil can quote scripture to his own ends.

There are only a couple of moments in the entire film when Assange seems to be anything like vulnerable – when two Kenyans are killed because of the website’s publications (the only people in the movie he says are/were his friends), and a moment right at the end when we learn the truth about his hair. The rest of time he wears the armor of idealistic fervor and self-confidence that rapidly reveals itself to be arrogance and ego. 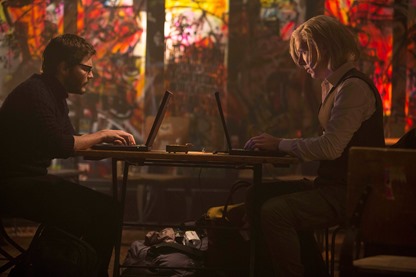 Berg, on the other hand, is a guy who falls in with Assange because of his belief in what WikiLeaks seems to mean. He’s the one who expands the website over several servers and persuades a friend to provide better security. He’s the one who has a social life, or at least a girlfriend – Anke (Alicia Vikander) – until Assange’s obliviousness puts a wedge between them (‘He has nowhere else to go,’ says Berg; ‘Well, I do!’ replies Anke).

Condon captures Assange and Berg’s guerrilla journalism – meetings in cybercafés (he manages to make typing seem sexy); imagined cyber-offices behind which the two hide in an avalanche of pseudonyms; the joy they get rubbing the mainstream press in their ability to get 10,000 hits an hour – while slowly building the layers of their characters.

The big problem with The Fifth Estate is that in telling side stories (the murder of the Kenyans; the work with and against the mainstream media; the behind-the-scenes government actions; the plight of an Egyptian source who’s forced to flee his home because of WikiLeaks), it loses focus. No one story gets the full treatment it deserves. As a result, actors like Stanley Tucci, Laura Linney and Alexander Siddig are required to make us relate to characters who are little more than cyphers. It’s a testament to their abilities that we care even a little about them.

The one area in which the film wholly succeeds is in bringing the ethics of whistleblowing, publication without consideration for possible ramifications and the debate between idealism and practicality to the fore.

Because of the brilliance of Cumberbatch and Brühl – and a supporting cast that also includes Peter Capaldi, David Thewlis and Carice Van Houten, among others – that facet of the film will make audiences think and, possibly question all forms of journalism – and especially the online form.

That is an accomplishment worth talking about. Too bad it wasn’t in a better film.