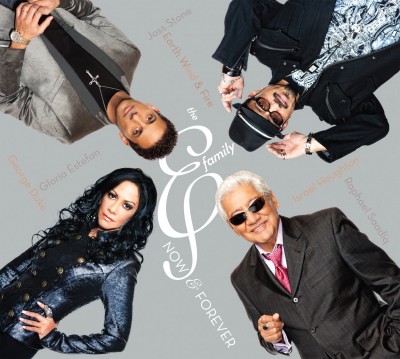 The E family, also known as The Escovedo Family has released many different individual projects for years. Well now The E Family has teamed up to collaborate on a special and incredible album entitled “Now & Forever” which is to be released on September 20th, 2011. Here’s the press release:

The Musical Family Dynasty Pete Escovedo, Sheila E., Juan Escovedo and Peter Michael Escovedo Will Celebrate This Album of a Lifetime With A Star-Studded Affair At The World-Renowned Conga Room in Los Angeles

Los Angeles, CA (September 12, 2011) – After years of playing on each other’s projects, The E Family came together to produce this ultimate, long overdue and highly anticipated labor of love, Now & Forever. Available in stores on September 20, 2011 on Sheila E’s Stiletto Flats Music through Waterfront Entertainment (Fontana / Universal), Now & Forever pays homage to their collective diversity of styles, influences and experiences.

The E Family is a force with which to be reckoned. Pete Escovedo discovered and cultivated a love and passion for music, embracing Latin jazz and passing it on to his sons and daughters. Pete has performed and toured with Tito Puente, Mongo Santamaria, Bobby McFerrin, Cal Tjader, Woody Herman, Billy Cobham, Boz Scaggs, Anita Baker, Arturo Sandoval, Poncho Sanchez, Carlos Santana, and Chick Corea to name a few. Today, Pete leads one of the country’s top orchestras, performing their own unique brand of Latin jazz. Pete’s daughter, multiple Grammy® and Emmy® nominee Sheila E. for her Outstanding Contribution as Musical Director for Fiesta Latina: A Performance At The White House, is also an impressive drummer, composer, producer and philanthropist, having performed with artists such as Ringo Starr, Prince, Jennifer Lopez, Lionel Richie, Diana Ross, George Duke, Placido Domingo, Natalie Cole, Phil Collins, Celine Dion, Quincy Jones, Stevie Wonder and countless others. Juan Escovedo brings his flavor of R&B to the table, having performed with a roster of noted artists including Patti Labelle, Jodi Watley, Lou Bega, MC Hammer, En Vogue, Herbie Hancock and many more. Youngest son Peter Michael has performed with Mariah Carey, Marvin Gaye, Stevie Nicks, and George Michael, to name a few, and is a talented musical director whose credits include The Martin Short and Wayne Brady television shows, the latter garnering him two Emmy® nominations.

Collectively they are the latest evolution of one of the most amazing musical family dynasties that continues to deliver a colorful and powerful concoction of music to move the body and – soothe the soul. The E Family’s new release, Now & Forever‚ is a track collection encompassing a rich range of musical influences, ranging from R&B, Latin, Hip Hop, Pop and Jazz, and features special guest artists Earth Wind & Fire, Gloria Estefan, Joss Stone, Israel Houghton, Raphael Saadiq, George Duke, Wes Quave, and Damon Castillo. It is a must have for a wide range of music lovers.

In celebration of the release of Now & Forever, The E Family will hold a star-studded album release event on September 20, 2011 at the Conga Room at LA Live in downtown Los Angeles. The event will feature a full performance with the 14-piece band and give fans the opportunity to enjoy the spectacular experience of seeing the family live together on stage. Red carpet arrivals begin at 6:30pm and doors open to the public at 7:00pm. It will be an event not to be missed. Special guests, press information and event details will follow at a later date.

The E Family: Now & Forever will be released on September 20th, 2011. In the meantime, The E Family has setup an account on Soundcloud to stream several of their songs before the release date. Check out their songs here:
http://soundcloud.com/e-family/sets/the-e-family/s-kDoE2 Also, you can hear thirty second clips of all their songs from “Now & Forever” here: http://the-e-family.com/mds/listening-room-song-previews