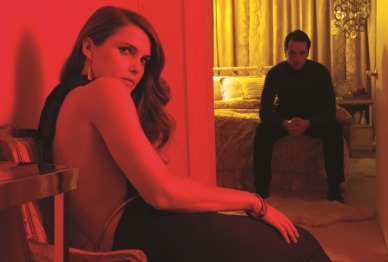 The Americans, the most critically-acclaimed new drama of 2013, was recently named by the AFI as one of the Programs of the Year.  The series also received the most Television Critics Association Awards nominations of any show this year (four) and earned four Critics’ Choice Television Award nominations. The series stars Keri Russell, Matthew Rhys, Noah Emmerich, Holly Taylor, Keidrich Sellati, Annet Mahendru, Alison Wright and Susan Misner.

The series premiere of The Americans on January 30, 2013 stands as FX’s most-watched drama debut ever, drawing 5.1 million viewers.

Currently in production in New York, The Americans is a period drama about the complex marriage of two KGB spies posing as Americans in suburban Washington D.C. shortly after Ronald Reagan is elected President.  The arranged marriage of Philip (Rhys) and Elizabeth Jennings (Russell), who have two children – 14-year-old Paige (Taylor) and 11-year-old Henry (Sellati), who know nothing about their parents’ true identity – grows more passionate and genuine by the day, but is constantly tested by the escalation of the Cold War and the intimate, dangerous and darkly funny relationships they must maintain with a network of spies and informants under their control. Their neighbor, FBI Agent Stan Beeman (Emmerich) has already come dangerously close to discovering their secret, but was thwarted by Nina (Mahendru), his KGB mole and paramour. Torn between his wife Sandra (Misner) and his deepening feelings for Nina, Stan is completely unaware that the beautiful Russian is actually a double agent, reporting on him to the KGB.  Philip has been more successful handling his mole within the FBI, Martha (Wright), assistant to Stan’s boss, Special Agent Gaad (Richard Thomas). Romancing Martha under the guise of one of his cover identities, an FBI bureaucrat named “Clark,” Philip has secured her unquestioning loyalty…by marrying her. Meanwhile, in the Jennings’ house, Paige has become increasingly suspicious that her parents are hiding something.

Created and executive produced by Joe Weisberg (Falling Skies), a former CIA agent who went on to become an accomplished author, The Americans is produced by Fox Television Studios and FX Productions. Joel Fields and Graham Yost are also executive producers, along with Daniel Sackheim and Amblin Television heads Justin Falvey and Darryl Frank.

FX is the flagship general entertainment basic cable channel of FX Networks, a business unit of Fox Networks Group. FX Networks is comprised of FX, FXM, and FXX, its newest channel, which debuted on September 2, 2013. Launched in June of 1994, FX is carried in more than 98 million homes. The diverse schedule features a growing roster of critically acclaimed and award winning hit dramas series, including Sons of Anarchy, Justified, The Americans and The Bridge; the miniseries American Horror Story: Coven; and the acclaimed hit comedy series Louie, Archer, and Chozen, which will debut January 2014. The network’s library of acquired box-office hit movies is unmatched by any ad-supported television network. FX’s roster of acquired hit series includes Two and a Half Men, Anger Management and, coming in 2014, Mike & Molly.