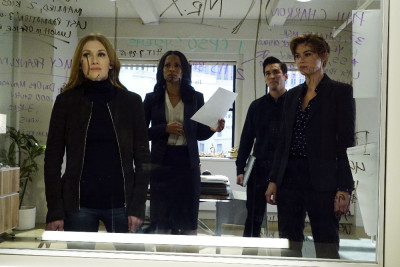 Alice’s company – which her partner Rose Rollins (Valerie Anderson) runs so that she can be in the field – has been after a very cagey quarry they call Mr. X. They pinpoint a suspected partner in his corporate espionage but Mr. X. is, in fact, one step ahead of them the whole way and even though they catch his source, he gets away scot free.

It’s only when Alice arrives home after her bad day that we meet her fiancé, Christopher Hall (Peter Krause) and see that he is Mr. X (not a spoiler – it’s in most of the TV spots for the show).

Shortly thereafter, we meet his real partner, Margo Bishop (Sonya Walger), and their cleanup man, Reggie Lennox (Alimi Ballard) – and Mr. X. takes everything (her life savings, the company’s client list, access codes…), leaving Alice and her firm high and dry. The only flaw in his brilliantly executed plan is that he seems to have actually fallen in love with her. 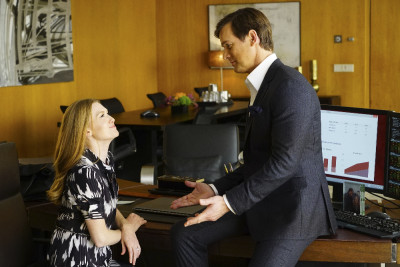 Further complications arrive in the person of an FBI agent (formerly Interpol), Jules Dao (Jackie Ido) – who’s tracking someone he believes they are also after…

The series premiere was written by Jennifer Schuur (from a story by Kate Atkinson and Helen Gregory) and directed by Julie Ann Robinson. It’s a technically excellent piece with some serious brass and sass – and a premise that leads to a situation that’s not so much cat and mouse as cat vs. cat.

More than anything I’ve seen in a while, Robinson uses split screens to attack a scene from several different perspectives – setting up an opportunity to see events from the points of view of both Alice and Mr. X (whom Reggie refers to as Ben). This adds to the cat vs. cat idea and gives us reason to understand both sides of the ongoing game.

Like the other shows from Shondaland, The Catch is filled with an intriguing cast of characters – played by a diverse, sexy and extremely talented actors. Like those other Shondaland shows, it also burns through a lot of plot.

Only one episode was available for review, but it’s a humdinger of a premiere for the series – fast-paced, smart and sexy fun. Should the rest of this mid-season show’s episodes equal the fun level of the premiere, The Catch will be a great ride.