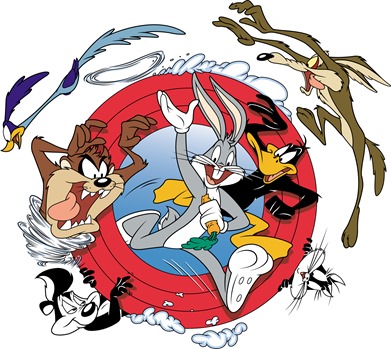 The Looney Tunes are back! The beloved – and outstanding – series of theatrical animated shorts are returning to Boomerang in a one-hour block on Saturday and Sunday mornings (8/7C) as of October 5th. Characters like Bugs Bunny, Daffy Duck, Porky Pig, Elmer Fudd, Marvin the Martian and the Roadrunner & Wile E. Coyote emerged from these inspired toons to become icons of the best and funniest that cartoons had to offer – exceeding even Disney in popularity.

Check out the press release, after the jump, for details and a list of classic titles that will be among the first to air.

Warner Bros. Theatrical Shorts Not Seen on 24-Hour All-Toons Network Since May 2007

“LOONEY TUNES still stand today as the most clever and entertaining theatrical shorts ever produced,” said Stacy Isenhower, senior vice president of programming and scheduling for Boomerang. “We’re thrilled to bring them back to Boomerang on the weekends, offering true cartoon fans the opportunity to enjoy again these incredible shorts.”

LOONEY TUNES is a Warner Bros. series of animated short films produced from 1930 to 1969 during the golden age of American animation. LOONEY TUNES originally showcased Warner-owned musical compositions through the adventures of cartoon characters such as Bosko and Buddy. Later, the shorts introduced and made stars of popular characters such as Bugs Bunny, Daffy Duck, Porky Pig, Elmer Fudd, Sylvester, Tweety, Taz, Marvin the Martian, Wile E. Coyote and Road Runner, Foghorn Leghorn, Yosemite Sam, Pepé Le Pew, and Speedy Gonzales. From 1942 into the 1960s, LOONEY TUNES were the most popular cartoon shorts in movie theaters, exceeding the works of Disney and other popular competitors, including Paramount/Famous Studios, Walter Lantz and MGM.

Since its success during the short film era of cartoons, LOONEY TUNES has become a worldwide media franchise, spawning several television series, feature films, comic books, music albums, video games, and amusement park rides. Many of the characters have made and continue to make cameo appearances in various other television shows, films, and advertisements. The most popular LOONEY TUNES character, Bugs Bunny, is regarded as a cultural icon and has appeared in more films than any other cartoon character. In 2013, TV Guide ranked LOONEY TUNES the third Greatest TV Cartoon of All Time.

Following are some of the first LOONEY TUNES shorts to appear on Boomerang this October:

· Hillbilly Hare (1950), Saturday, Oct. 5 (TV-G)—Bugs Bunny is vacationing in the Ozarks and stumbles into the territory of two hillbilly brothers Curt and Punkin’head Martin. After having several of their hunting attempts foiled, Curt and Punkin’head Martin are determined to get revenge on Bugs for their humiliation. Bugs easily outsmarts them and eventually leads them into a violent square dance involving repeated slapstick comedy gags.

· Tweet Dreams (1959) Saturday, Oct. 5 (TV-G)—Sylvester tells a psychiatrist of his frustration at not being able to catch Tweety, his repeated failures are illustrated through past escapades. Apparently, Sylvester’s sob story puts the doctor to sleep, and upon the doctor’s waking up, realizes he’s got to fly (literally, by flapping his arms) to Detroit. Sylvester jumps out the window to fly after the psychiatrist.

· Hip Hip-Hurry (1958) Saturday, Oct. 5 (TV-G)—The Road Runner zooms into view, labeled “Digoutius-unbelievablii”, and then moves away to escape Wile E. Coyote, labeled “Eatius-slobbius.”. The chase leads to a 3-way Y fork, leaving Coyote confused as to which way his enemy went. The bird answers for him by pulling up behind him and beeping, giving the coyote a real headache on the rocks above. After hitting the ground, Wile E. comes up with an idea or two on how to catch the Road Runner, involving outlandish schemes and various ACME products.

· Rabbit Hood (1949) Saturday, Oct. 5 (TV-G)—Parodying the traditional Robin Hood story, the Sherriff of Nottingham catches Bugs eating the King’s carrots and is about to arrest him, when Little John shows up and tells them that Robin Hood is on his way. A variety of misadventures ensure, including the infamous “knighting” exchange where Bugs dresses up like a king, and proceeds to pound the skull of the Sherriff with his scepter, all the while dispensing an oddball title with each strike. In the end, the “real” Robin Hood appears in the form of Errol Flynn from the classic 1938 movie “The Adventures of Robin Hood.”

· Napoleon Bunny-Part (1956) Sunday, Oct, 6 (TV-G)—Bugs is traveling underground, only this time he winds up in France at the headquarters of Napoleon Bonaparte, aptly called “Headquartiers du Napoleon.” Napoleon thinks Bugs is a saboteur, and sends a guard after him. Bugs then disguises himself as Josephine and asks Napoleon to dance. Napoleon sees Bugs’ tail through the disguise and chases Bugs, catching him at gunpoint and ordering him to the guillotine. But two men in white coats show up and one says to the other: “Hey Pierre, here’s another Napoleon”, and Pierre replies: “that’s the twelfth one today.”

· Scrambled Aches (1957) Sunday, Oct. 6 (TV-G)—Wile E. Coyote (Eternalii Famishiis) and the Road Runner (Tastyus Supersonicus) are continuing their chase through the twisty roads of the desert. As Wile E. closes in on the Road Runner, a 4-way intersection is reached and the Road Runner takes a left turn. Wile E. looks back as he brakes himself into the dirt, not noticing a “DANGER BRIDGE OUT” sign, and thus falls off the edge of the plateau and bursts a hole in his shape in the ground below. The Coyote walks out of the hole in disgust and plans his next scheme.

· Ain’t She Tweet (1952) Sunday, Oct. 6 (TV-G)—Sylvester stands outside a pet store window, hungrily watching Tweety (singing “Fiddle-De-Di”) in the display area. As Sylvester is planning to cut through the glass with a glass cutter, a deliveryman takes Tweety away, to be delivered to Granny’s house.  Sylvester follows the deliveryman and rushes into the yard, only to discover a whole army of bulldogs. Suffice to say, all of Sylvester’s ensuing attempts to capture Tweety fail miserably.

· A Witch’s Tangled Hare (1959) Sunday, Oct. 6 (TV-G)—Opening with the poet William Shakespeare trying to write “Macbeth,” he hears the loud screeching laugh of Witch Hazel and watches her stir her cauldron. The witch has Bugs Bunny trapped, sleeping on a platter and wakes him up. Bugs believes the cauldron to be a bath and readily climbs in, only realizing his mistake after reading her open recipe book. He quickly jumps out and runs away toward the castle, with Witch Hazel pursuing him on her flying broomstick. All sorts of “Shakespearean” calamity unfolds.

Boomerang is Turner Broadcasting System, Inc.’s (TBS, Inc.) 24-hour cable/satellite network offering the best in classic animated entertainment.  In partnership with Cartoon Network, the service boasts more than 75% unduplicated programming and is available to cable/satellite operators and their customers in Spanish.  Boomerang’s official Web site is located at http://Boomerang.CartoonNetwork.com.