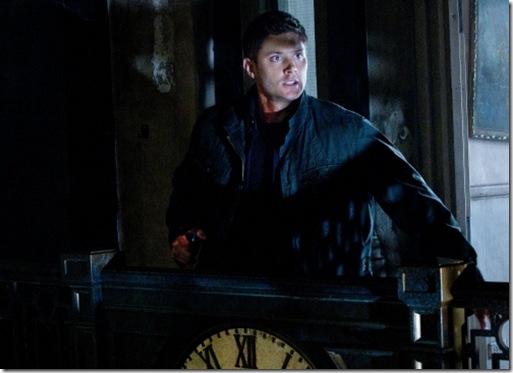 Dean Winchester (Jensen Ackles) got ‘vamped’ and his brother Sam Winchester (Jared Padalecki) stood by and allowed it to happen.

That has got to be the creepiest thing I’ve ever seen on Supernatural. But, it’s also the first time in a long while that an episode of this hit action series has put me on the edge of my seat. I liked that!

Yes, I like the kind of brotherly interaction that Supernatural started out with. I really don’t want to see them at odds with each other for the rest of the run of the series like they have been since season 3. Yet I have to admit I really like season 6 so far and S6.05 Live Free or Twi-Hard was the kind of thrill ride I like in an action series. I liked Dean’s struggle not to succumb to becoming a monster and to hold onto his humanity. His scenes with Lisa and Ben were heartbreaking and Jensen Ackles hit it out of the ball park again with yet another variation on Dean’s life as a hunter.

In all of the recent interviews done with Jared Padalecki and the writers about the new direction for Sam Winchester in season six of Supernatural, they all talked about how he has abandoned his quest for living a normal life and has embraced the ways of being a hunter. They talked about Sam having a harder edge to him and being more like first season Dean Winchester I.e. kill the monster first and ask questions later. I like how Jared Padalecki has approached playing this new incarnation of Sam Winchester. He has infused the character with an interesting sort of emotional detachment. He has also made some changes to Sam’s body language to a certain degree. Whereas, to me Sam used to have some uncertainty and hesitation in him, now he approaches a hunt with the assurance of a cat stalking its prey. In S6.05 Live Free or Twi-Hard, the writers showed us that Sam is really nothing like he’s ever been before and even more like a great cat on the hunt. It was chilling to watch him just stand there with this look of mild curiosity on his face as he let his brother become bait for a trap to catch the alpha Vampire.

Grandpa Samuel Campbell (Mitch Pileggi) is seriously starting to get on my nerves as a character. The whole ‘the Campbell’s are the best thing in hunterdom since sliced bread’ attitude is grating. Not to mention that there seems to be a concerted effort by the writers to denigrate John Winchester’s contributions to his son’s skills as hunters. I want Dean to give Samuel a good ‘don’t be talking trash about my dad’ slap down like he does everyone else because Samuel deserves  to be reminded that John Winchester was a hunter too and good one.

S6.05 Live Free or Twi-Hard was fun ride that, like I said, kept me on the edge of my seat and it made me remember why I loved watching this show in the first place. Tomorrow’s episode, S6.06 You Can’t Handle the Truth looks like it’s going to be a rocking one too. Sneak Peak look at it after the jump.

Supernatural S6.05 You Can’t Handle the Truth airs on the CW Network this Friday night at 9PM EST, right after an all new episode of Smallville. 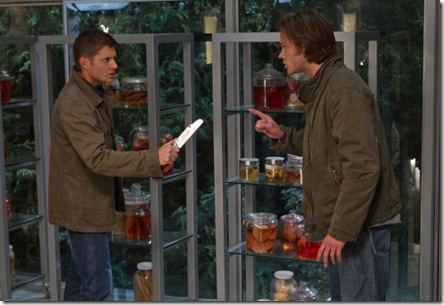 THE TRUTH HURTS — Sam (Jared Padalecki) and Dean (Jensen Ackles) investigate a series of suicides and discover the victims were being told brutal truths that drove them crazy.  They find out someone is invoking the Goddess of Truth, Veritas, forcing people to be cruelly honest against their will and Dean is the next victim.  Dean is forced to tell Sam the truth about how he feels about his return from Hell.   Rod Hardy directed the episode written by Eric Charmelo & Nicole Snyder with story by David Reed, Eric Charmelo and Nicole Snyder. 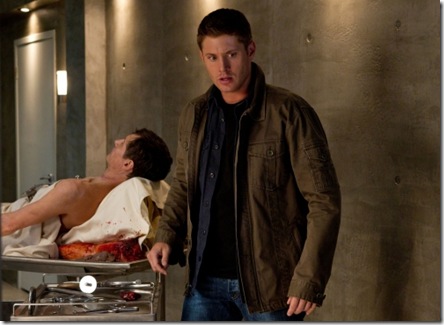 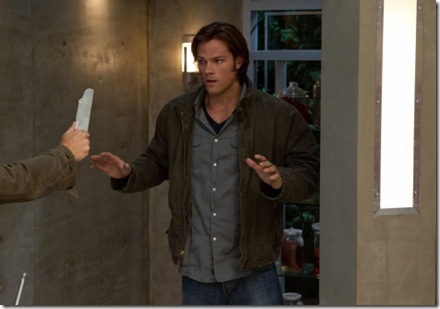 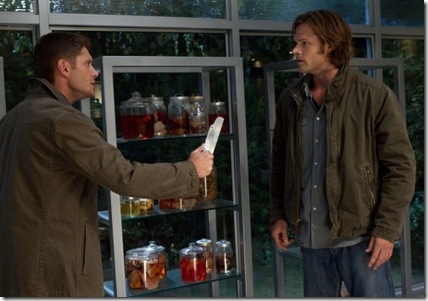 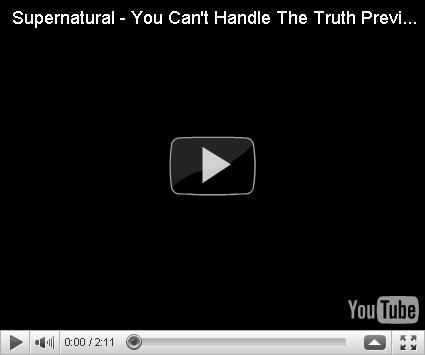