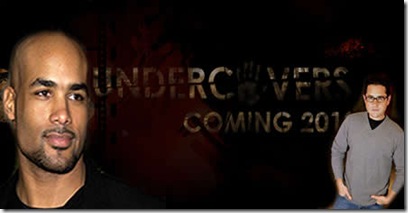 Undercovers, from acclaimed writer/producer/director J.J. Abrams (Star Trek, Fringe, Lost, Alias) and executive producer/writer Josh Reims (Brothers and Sisters), is NBC’s first scripted acquisition for 2010-11 season. The announcement came via press release. The series Boris Kodjoe and Gugu Mbatha-Raw as married spies who are forced to come out of retirement to take on a special assignment. Details follow the jump.

Abrams serves as co-writer, executive producer – and also directs – his first direction of a TV series pilot since Lost.  Undercovers is a sexy, fun, action-packed spy drama that proves once and for all that marriage is still the world’s most dangerous partnership.  Outwardly, Steven Bloom (Boris Kodjoe, Tyler Perry’s Madea’s Family Reunion, Soul Food, Resident Evil: Afterlife) and his wife, Samantha (Gugu Mbatha-Raw, Doctor Who, Bonekickers), are a typical married couple who own a small catering company in Los Angeles and are helped by Samantha’s easily frazzled younger sister, Lizzy (Jessica Parker Kennedy, Smallville).
Secretly, the duo were two of the CIA’s best spies until they fell in love on the job five years ago and retired.  When fellow spy and friend Nash (Carter MacIntyre, American Heiress) goes missing while on the trail of a Russian arms dealer, the Blooms are reinstated by boss Carlton Shaw (Gerald McRaney, Deadwood) to locate and rescue Nash.  The pair is thrust back into the world of espionage as they follow leads that span the globe — and Steven and Samantha realize that this supercharged, undercover lifestyle provides the excitement and romance that their marriage has been missing.  Also starring is Ben Schwartz (NBC’s Parks and Recreation).