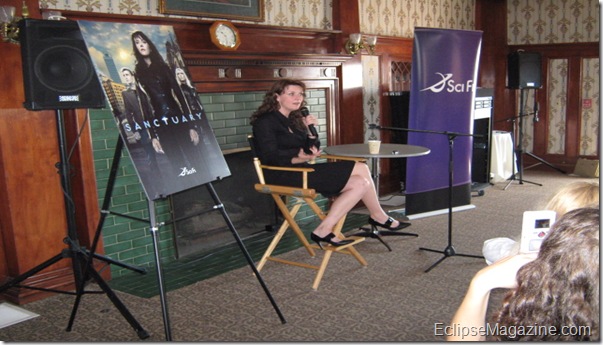 Sci-Fi really rolled out the red carpet this year (this is where I say, this wasn’t a “junket,” I paid for the trip out of my own pocket). My carpool buddies were really cool Chris, his wife Tara and Derek were really cool. We had a fun 1 hour drive from the airport. It’s always really neat meeting other webmasters who have the same issues that I do, even at much more well known sites like the one Derek works at. I always thought the folks at his site hated me, but apparently they don’t. So that was nice to know. 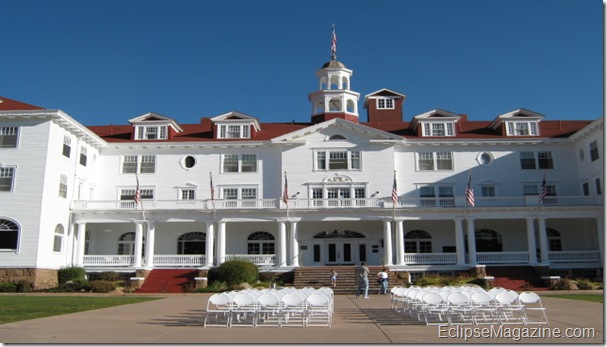 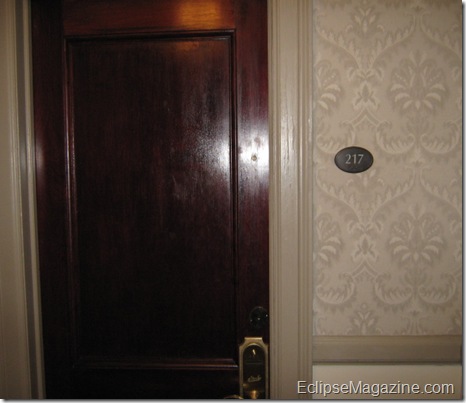 The weekend started with an excellent dinner and soiree. The room was divided in half, apparently Sci-Fi used the weekend to also smooze with their advertisers and contest winners. They kept us press folks away from them most of the weekend. It is always interesting attending one of these things, I’m always reverted back to my childhood – “I don’t know these people, what am I going to say, will they like me,” blah, blah. All the folks that I knew were sitting at different tables, that actually had people sitting there. So I sauntered over and mingled a bit, when it was time for Dinner my table finally filled up.

Sci-Fi set up the seating so that the tables would feature the cast of one of their shows, a couple of Sci-Fi executives and a couple of press folks. It was a real intimate affair with everyone getting a chance to really mingle and get to know one another fairly well. Turns out I was sitting with the cast of Sci-Fi’s latest gamble, The Chase. The 4 hour dinner just flew by all of the guys and everyone else at the table were really cool. I was trying to get some dirt about this new mystery project but they wouldn’t spill the beans until the next day.

CHA$E is an action-packed, edge-of-your-seat reality competition show that pits a group of contestants against each other in the quest for cash prizes, while being stalked by relentless ”hunters.” The action takes place in real time over 60 minutes throughout various Los Angeles landmark locations including San Pedro Harbor, Universal Theme Park and Descanso Gardens. As the clock counts down, the competition gets harder as more “hunters” appear on the “game board,” the perimeter changes, and tasks are assigned that test fraying nerves. Contestants earn money for every second they “stay alive.” If they are overrun by a “hunter,” they lose everything. The last person standing can win up to $50k.

It was funny because Amanda Tapping was sitting in the table next to me and I was joking with the Chase guys all night that I was going to go over and talk to her, or ask them to go and bring her to our table. I discovered Stargate SG1 last year and went on a 6 month obsession watching all the shows and reading a lot of SG1 fan fiction. I was a giddy school girl. I met Amanda on Saturday and she was really cool people. I kept bumping into her all day and we “hung out” during our Ghost Hunt with Jason and Grant that night. And this was why the weekend was so cool for me.

Usually at an event like this, the actors are “air lifted” in. Do their Q and A and get the heck out of dodge. You never feel like you really get to know someone. This time everyone, The Ghost Hunters, the Destination Truth Guy, Amanda, The Chase Folks and the Scare Tactics Guys came in Friday morning and stayed the entire weekend. It was a really relaxing environment where everyone had drinks and just chilled. It was really interesting watching them interact with each other and everyone watched each other’s Q and A’s from the back of the room. 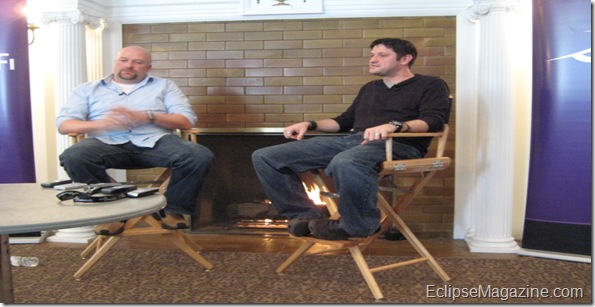 Jason and Grant – The Ghost Hunters (who, for some reason loved me and remembered me from when I met them at NY Comic Con a few months ago) took us on a midnight Ghost Hunt at the Stanley. It was just like being in an episode of their show, a very cool experience. We all met at around midnight and went into one of the rooms that was reportedly haunted. And there was definitely a sense that there was a ghost in the room. Jason had this meter that they called the K2. Supposedly it lights up if there’s a presence in the room. So every time we asked questions the light would respond. Really freaky stuff, we all started to believe we were talking to a Ghost. Later in the hunt Amanda and I started joking with each other about Ghost Farts.

Earlier in the day the boys from The Chase wanted to give us a taste of the show. So like an idiot I volunteered to participate. The game is Sci-Fi Channel’s version of The Amazing Race with a video game twist. They give you a backpack – which I never asked what went into it, compass and an iPhone. Every couple of minutes they sent a text message with instructions on what to do next. It was a calm experience until a major thunder storm came roaring through, at that point they released the Hunters who came after us. I thought I had a plan until I saw one of the hunters then my brain froze and I panicked when he took off after me. I was completely drenched and caught a cold. The game was interesting and will be fun to watch on television when they cut out the parts where you are just wondering around aimlessly. Once that rain started, I was staring at my iPhone wishing for a message or anything to happen other than getting soaked. 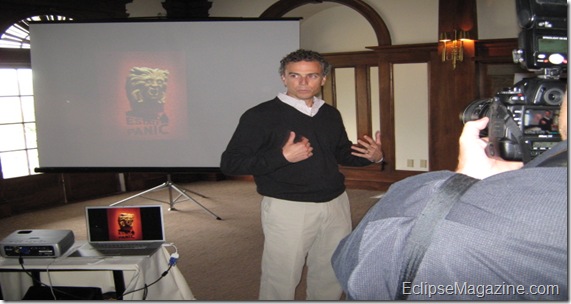 Sci-Fi development manager – Mark Stern (I don’t know his exact title) was air dropped in from an Argentina set to give us a peak at this weird new game show where it’s kind of like a real life version of the movie Saw, only it takes place in a castle. The object is to survive these “brutal” challenges like sticking your arm in a tank of crabs to grab cash, or survive a collapsing room, or run through a room where (I believe) glass is breaking. If you survive all of these challenges you end up in a vault where you are chained to the floor and the object is to find the key to unlock your chain. The catch is, each drawer contains something disgusting, like mice or snakes, or something else entirely. I’m curious to see how it works out. Mark is a really cool guy, I spent a lot of time with him at last year’s digital event, this year he was, like I said air dropped in and we didn’t see him for the rest of the weekend. If you want a show on the Sci-Fi Channel this is the man you talk to.

Overall a really good weekend and I’m looking forward to Sci-Fi’s fall lineup. Of course I can no longer be objective about the shows, which is why I have Sheldon around to do the TV Reviews. Later this week I’ll post the recordings from all the Q and As. And a full synopsis of all of their shows for this fall. If I had one concern it would be that it seems like other than Sanctuary it seems like Sci-Fi is abandoning scripted programming for the lucrative world of Reality TV. They have a strong line up, but it seems a bit like overkill.

One thought on “TELEVISION: Michelle Hangs out with Ghost Hunters, Sanctuary and gets Chased! Report from Sci-Fi’s recent Digital Press Tour!”