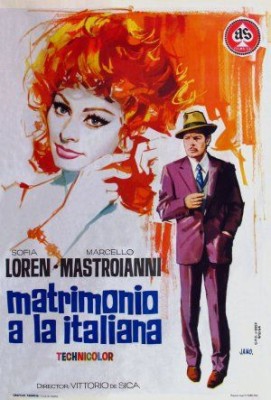 Loren Will Also Introduce a Screening of Marriage Italian Style(1964)

TCM (Turner Classic Movies) today announced Academy Award®-winning actress Sophia Loren (Two Women) is set to attend the 2015 TCM Classic Film Festival, taking place in Hollywood March 26-29, for a sit-down interview with TCM host Robert Osborne about her life and extraordinary career. In addition to the interview, Loren will be on-hand to introduce a screening of Marriage Italian Style (1964), for which she received an Oscar® nomination for Best Actress. Loren is also a recipient of an Honorary Career Achievement Academy Award. The interview will be taped Saturday, March 28, in front of a live audience of festival passholders at the The Ricardo Montalbán Theatre. The interview will then air on TCM in spring 2016 as the original special Sophia Loren: Live from the TCM Classic Film Festival.

“For more than six decades, Sophia Loren has been an enchanting force of nature on movie screens across the globe,” said Osborne. “She is one of the great beauties and magical leading ladies of film. It’s going to be a great treat to learn from her first hand about her life as a film star and the people she’s worked with such as Cary Grant, Gregory Peck, John Wayne, Marcello Mastroianni and Daniel Day Lewis while also earning an Academy Award® for her performance in Two Women.”

Loren joins an already exciting roster at this year’s festival, including previously announced appearances by Ann-Margret for a screening of The Cincinnati Kid (1973) and former astronaut Captain James Lovell for the 20th anniversary world premiere restoration of Apollo 13 (1995). Academy Award®-winners Julie Andrews and Christopher Plummer are confirmed to walk the red carpet for the festival’s opening night 50th Anniversary gala presentation of The Sound of Music (1965).

Of all the foreign sex symbols to explode on American screens in the 1950s, Sophia Loren is the most iconic and the most enduring, largely because she is as talented as she is beautiful. After early films that relied primarily upon her sultry good looks, she had the good fortune to work with director Vittorio De Sica, who helped hone her comic talents in The Gold of Naples (1954) and later demonstrated her dramatic prowess with an Oscar®-winning performance in Two Women (1960). By that point, Loren had also become a box-office hit in American films. Her other great screen partner was Marcello Mastroianni, with whom she teamed for such hits as De Sica’s Yesterday, Today and Tomorrow (1963) and MARRIAGE ITALIAN STYLE (1964), with the latter earning her an Oscar nomination. In 1991, the Academy of Motion Picture Arts and Sciences awarded her an honorary Oscar in recognition of her career achievements. Still one of the world’s most beautiful women, Loren continues film work, recently co-starring as Daniel Day Lewis’ mother in Nine (2009) and acting for her son, director Edoardo Ponti in the short Human Voice (2014).