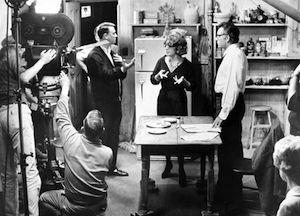 Mike Nichols may have died this week, but he’s left behind a reputation as a wonderful human being and a trove of superb motion pictures to guarantee he will never be forgotten.

On Saturday, December 6th, TCM will run a triple feature of films that speak to his ability to do vastly different things really, really well: Who’s Afraid of Virginia Woolf?, The Graduate, and Carnal Knowledge. For further details, follow the jump.

Turner Classic Movies (TCM) will celebrate the life and career of award-winning filmmaker Mike Nichols with a three-film tribute on Saturday, Dec. 6. Nichols, who passed away Nov. 19 at the age of 83, is one of the few artists who has earned Oscar®, Tony®, Emmy® and Grammy® accolades. TCM’s tribute will showcase his Oscar-nominated work on Who’s Afraid of Virginia Woolf (1966) and his Oscar-winning work on The Graduate (1967). The night will also include Nichols’ acclaimed 1971 film Carnal Knowledge.

The following is the complete schedule for TCM’s tribute to Mike Nichols.

TCM is part of Turner Broadcasting System, Inc., a Time Warner company. Turner Broadcasting creates and programs branded news; entertainment; kids and young adult; and sports media environments on television and other platforms for consumers around the world.