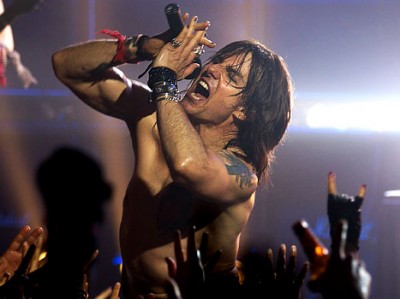 I Want To Rock because Tom Cruise is Wanted. Dead or Alive!  Ok, I can go on with my 80’s hair band references, but let’s not.  But don’t stop believing that Rock of Ages is anything but awesome. Well, the original Broadway show, the movie is based on is amazing. Not so sure about this clunky Hollywood adaptation. The movie is campy and silly but not enough.  It is held together by an amazing performance by Tom Cruise.

END_OF_DOCUMENT_TOKEN_TO_BE_REPLACED

On this episode of GeekScholars Movie News, we begin by taking a look two very different trailers, as we review the first previews for the 5th installment in the franchise that literally will not die, Resident Evil: Retribution, and a new Glee-like comedy about a collegiate a cappella group, Pitch Perfect.

If you were going to remake any movie musical, which one would you pick, and who would you cast? That’s the question posed to the GeekScholars in this week’s topical discussion. We would love to hear what you think of our picks, as well as what your choices might be!

After that, GeekScholars Fox and Jill took to the theaters to partake in the adaptation of the 80s-styled musical, Rock of Ages, so listen in to hear their thoughts on a film that received rather mixed reviews from their fellow critics.

Finally, the GeekScholars quickly tackle some of the news stories of the past week, including: even more Robocop casting, a Snow White and the Huntsman Sequel, and new information about the Henry Cavill-led movie, The Great Wall.