If you love Archie, Elf Quest, Game of Thrones, The Goon or Fight Club, Dark Horse has something cool you<ll want to check out at Comic-Con 2015.

Among their exclusives for this year’s big bash in San Diego are the Goonies 30th Anniversary print by Eric Powell; the sculpted Robert Baratehon Crown from Game of Thrones; an exclusive Groo vs. Conan harcover; an exclusive hardcover of Elf Quest: Final Quest, and lots more. Follow the jump for the complete list (with photos).

END_OF_DOCUMENT_TOKEN_TO_BE_REPLACED 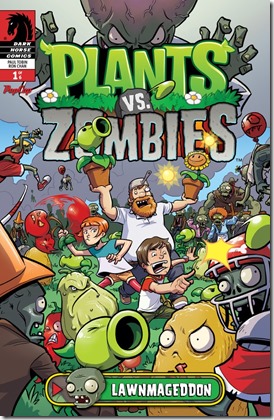 The first two chapters of Plants vs. Zombies, a new, six-issue digital comic from Dark Horse Comics, are now available – along with a standalone iOS app for the comic. The comic is based on the popular video game from – and published in a partnership with – PopCap Games.

The remaining four chapters will be released weekly. A hardcover edition will be be published later this year. The official press release follows the jump.