Tim Burton and Alice in Wonderland are such a natural combination that it’s a wonder that he hasn’t tried to make an Alice film years ago. Now that he has, it’s likely that it will draw mixed reviews because everyone has a different idea of what a Burton Alice would look like – not too mention the possibility that he’d make a sequel to the Lewis Carroll novels. 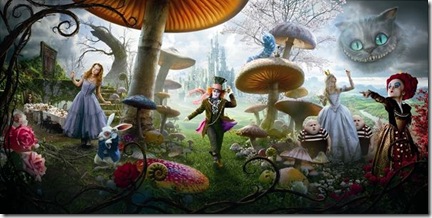 Well, Tim Burton’s Alice in Wonderland is as odd and vaguely sinister as any Burton fan could ask for. It also pushes the bounds of its PG rating as far as it can. I can see it producing nightmares in younger children and especially sensitive adults. From where I sit, this is a Good Thing. Alice in Wonderland should be a bit darker and more twisted than other classic tales – that aren’t Grimm’s Fairy Tales, at least.