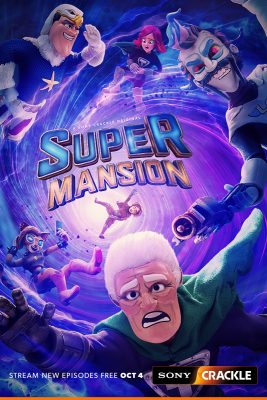 After defeating Zenith’s (Yvette Nicole Brown) evil Uncle Ridan (Taran Killiam), the League finds themselves trapped in a dystopian future, but when they escape back to our time, they discover they’ve been gone six months…and Dr. Devizo (Chris Pine) and his Injustice Club has replaced them as the League of Freedom!

Crackle’s Emmy-nominated animated series SuperMansion returns for its third season on Thursday, October 4th – and will be at New York Comic Con for a panel the same day.

After defeating Zenith’s (Yvette Nicole Brown) evil Uncle Ridan (Taran Killiam), the League finds themselves trapped in a dystopian future, but when they escape back to our time, they discover they’ve been gone six months…and Dr. Devizo (Chris Pine) and his Injustice Club has replaced them as the League of Freedom! Rex (Bryan Cranston) and the team must learn what it means to be heroes without the fame and glory afforded them by their stature in the mansion. But it’s not all champagne and roses for Dr. Devizo (Chris Pine) – his ex-wife, Debbie Devizo (Driver), returns from the island he stranded her on decades ago. The island has turned her into an unstoppable killing machine…and Dr. Devizo is in her crosshairs! Rex and his team must decide if Dr. Devizo is worth saving…and then figure out how!

Sony Crackle recently released its first-ever free “SuperMansion” Augmented Reality App. Featuring characters from the original series, this AR app experience allows you to pose, take pictures and record videos with Titanium Rex, voiced by Bryan Cranston. Dab with Rex or capture his fun observations in video and photo modes, then share with your friends and family on Facebook, by text message and more! Use the touchscreen on your device to turn Rex into a towering giant, or even make him tiny to fit into the palm of your hand. Fans can download the app in the App Store and on Google Play.